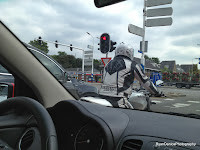 Way back in 2011, I wrote a post about the stupid things I had seen cars do while on the road or in a parking lot.  At that time I didn't have my Dutch license and was always on foot, so I saw my fair share of crazy driving decisions and had the easy access of my camera to snap pics.  Nowadays, I have a license and a car, so taking pictures isn't as easy but I still see a lot of craziness on the road.  One thing you see often at Dutch stop lights are pushy motorcycles.  When there is a double row of traffic stopped at a red light, a motorcyclist will often squeeze between traffic, riding down the middle line, making his (or her) way to the front of the row.  They wait in between the cars until the light changes, then speed off before the cars even get started.  (Keep in mind, this is against the law in The Netherlands but often overlooked by police.)  Personally, I think the motorcyclists are crazy to do this, how do they know no one is going to switch lanes or toss their door open.  Why should they get privileges because their vehicles are smaller?  On one hand I understand, it speeds things up for them... but at such a stupid risk.  And it's not only at traffic lights you'll see them squeezing between cars, I've also seen this on the highway during traffic jams!  My mother used to ride a motorcycle, and my step-dad still does, and in a million years they would never make this decision (plus in The States you'd be pulled over right away!)  Have you seen any crazy motorcyclists in your area?
(Sorry for the quality of the pic, but that's what you get with your phone at a stoplight!)
Email ThisBlogThis!Share to TwitterShare to FacebookShare to Pinterest