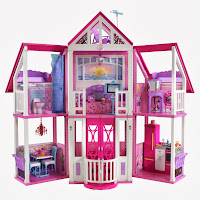 Growing up I was a huge Barbie fan, and of course I have done my best to get my daughter also interested in Barbie's.  She started collecting dolls last year, and since she has taken fairly good care of them we decided to take her collection a step further.  We invested (it's a small fortune here) in a Barbie Malibu Dream House!  There were a few options online, all different style and size Barbie houses, but I wanted the one closest to the first house I ever had.  It took a while to assemble (so many stickers).  I should have thought back to my childhood Barbie houses and assembled it while she was sleeping instead while she watched on, attempting to play every time I stuck the next piece on.  In the end, I managed to get it put together without breaking anything or losing any pieces.  (Well, one piece of the Barbie laptop is missing so I told her it was a tablet.)  Everyday, she goes in her room and acts out things that have happened in her life or things she wants to happen, role playing is a great form of expression.  The only issue is that her room is carpeted, so I might go out and buy a wood plank to put underneath it.  It's already hard enough for her not to knock all of the furniture over, the house doesn't need to move with! 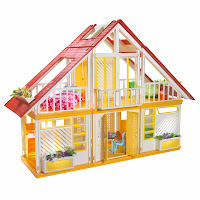 Were any of you Barbie fans growing up?  What toys from your past are you steering your kids toward?
Thought I'd throw in a pic of what my first Dream House looked like, not too much has changed in the overall look in the past 30 some odd years.

Did you know there is also a fun new series for kids, called Barbie: Life in the Dreamhouse
Email ThisBlogThis!Share to TwitterShare to FacebookShare to Pinterest