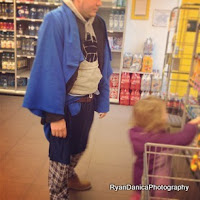 Yesterday my husband wanted to do something fun for our 3yr old, and out of every option he chose to dress up in a crazy combination of clothing.  At home this wouldn't have been bad but we were headed to the grocery store!  I threatened many times to stay in the car, but it's important to teach your child confidence.  So I just pretended he was dressed normally and mostly went about things that way.  He claims it was our daughters idea, but it was completely his idea.  I at least convinced her to wear a princess gown over her clothes and under her jacket so at least people thought there was a themed party or something, ha-ha!
Let's take a close look at his outfit choice...  It starts out with a base layer of pajamas, t-shirt & plaid cotton pants.  Then he added slick basketball shorts over the pants.  Then a random volleyball sweatshirt.  Followed by a corduroy dress jacket.  Then he added carpenter boots and a belt.  And finished the assemble off by wrapping himself in his Snuggie which he also tied behind his back and tucked into his belt.
Some people glanced and continued walking on... some people did double takes... some people actually stopped to take in the entire outfit.  At least one man spoke to us normally, he must have gone with the they-were-at-a-party idea.  And once we headed to the parking lot, me taking a breath of relief, we ended up helping a lady push her broken down car, what a sight!  I think this is just the beginning, because my husband keeps reminiscing about the crazy clothes combinations his father used to wear when picking my sister-in-law up from social events.  Maybe I should be worried for me & our tot!!!
Email ThisBlogThis!Share to TwitterShare to FacebookShare to Pinterest