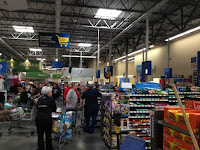 Here I am again, still on our short trip to Tennessee. When visiting The States there are always a few pit-stops we have to make, like American Eagle & Old Navy!!! But clothes stores aren't the only places we hit up, I love Walmart! When I used to live in Florida I avoided Walmart but since moving overseas I've learned to appreciate the deals. You may take Fruit of the Loom & Hanes for granted but we sure don't.  Where we are in TN, Walmart is one of the largest stores in town, it also includes groceries... I think I've been there 3 times already and intend to go again! 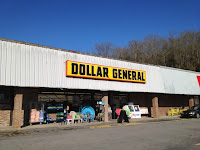 Like me, my grandma also appreciates saving money (I guess being frugal is in the family, and so is hoarding but that's a different post). In the hopes of saving some money we also hit up Dollar General (I mentioned bargain stores in an old post, I love them). I was glad we did because I found cards to mail home for 50cents!
As always I snapped a couple shots for you. The 1st is an insanely busy Walmart, especially for 2:30 in the afternoon. And the other is Dollar General for those of you unfamiliar with it.