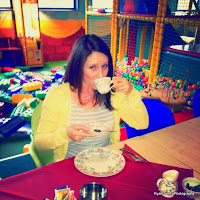 In the last year or so High Tea has become popular here in The Netherlands. Many of the restaurants & cafes offer it on the menu.  Now it's spreading even further!  A friend & I were able to enjoy High Tea at an indoor playground while our kids ran around also enjoying themselves, win-win!  Pretty smart of the company, NoNo's Land... on a weekly basis they're guaranteed to have tons of Moms sitting around while the kids wear themselves out on the slides, jungle gyms, and ball pits. Why not offer the Mom's something too (other than the extremely strong coffee they serve that make us tremble after a couple cups)! My friend & I meet often at the indoor playground and this time she suggested we reserve the High Tea menu. The playground was happy to serve us even though she did comment it's usually for larger groups and most women actually drink tea instead of coffee, but hey, as long as you're spending money they can't really complain!  We had no idea what to expect, each restaurant is different, and to be honest it was my first High Tea.  The playground had actually decorated our table... table cloth, napkins, silverware, china plates and cups, awesome!  It's hard to remember each course, pretty sure we started with mushroom soup, then little sausages (pigs-in-a-blanket), then ragout, then chocolate mouse, and then when we thought the courses were finished, she brought out two 3-tiered trays covered in baked goods and candy.  The display looked so nice even someone else's kid came up to us asking for some goodies.  Our kids dropped by occasionally mostly just thirsty from running around, but when they spotted the 2 trays full of sweets they also decided to hover around for a while.  (Don't worry we fed our kids nutritious sandwiches before going to the playground!)  It was a fun idea and didn't cost much more than what we would have spent on food and entry anyway.  Next time we're thinking about testing out the brunch, I'll be sure to keep you updated! 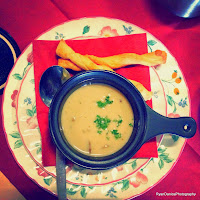 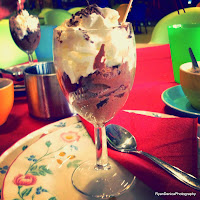 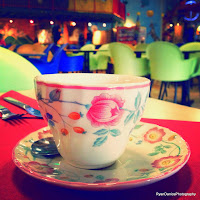