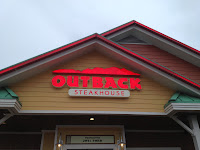 Wow, I can't believe I've managed to pump out 4 blog posts while visiting Tennessee.  Between my phone and my grandma's little Acer Aspire One I've been keeping you all fairly updated.  To be honest the point of this trip was to help my Grammy clean house, so it's not like you're going to get adventurous posts from the Smoky Mountains or even the heart of Nashville.  Besides helping my grandma, this trip has been about squeezing in some of the things I miss about The States, like extended family, shopping, and even a good steak.  (Is it rude to put them all in one category?  I hope not because I mean well.)  I've been putting a lot of great shots on Instagram but haven't used any of them for Wordless Wednesday, for me it's an entirely different creative outlet & audience.
Today we managed to squeeze in a trip to Outback Steakhouse.  I used to work at Applebee's so you most likely will not catch me in that type of restaurant but I do find Outback & Red Lobster acceptable (even though I know they probably work just the same behind the scenes!)  Anyway, I was in the mood for a lot of seafood at a price I can't find in The Netherlands but it turns out my grandma doesn't like it.  End of plan.  So, I opted out for surf 'n turf at Outback, for those of you unfamiliar with this term it means you get a combo of steak & seafood on one plate, yes!!!  And if you're at Outback you're almost required to also order the Bloomin' Onion for a starter.  Then there was the cheesecake, something you don't often find on a Dutch menu.  So after ordering half the menu, including caesar salad and grilled asparagus, I realized there was no way I could eat all of that, even though I was sharing the appetizer.  So in American style, we brought a doggy bag home (this is what Americans do because the portions are too large and/or they want to get their money's worth).  The restaurant even had hooks on the end of the booth to hang the doggy bag, can you believe it???  Now I'm stuffed, and it's been 3 or more hours since we ate!  All of the calories I worked off busting my butt around my grandma's house I consumed in one meal... oh yeah, and the Budweiser I'm sipping on isn't helping either!  We'll be leaving soon, and like I said, I have to squeeze everything in.  I actually wanted Michelob Ultra, that's what I used to drink in The States but I'm too used to Dutch beer and it would be like drinking water.
And in usual fashion, I have included pics for you! 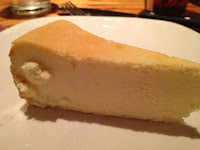 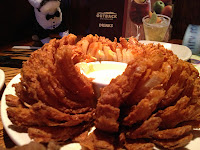 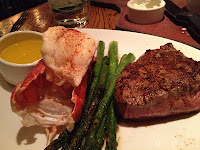