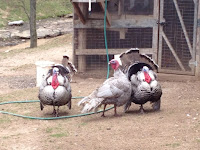 Well, I've never written a post from my phone before, so I hope this turns out o.k. I'm in The States now for a short trip so I can't promise a lot of posts but I'll do what I can.
Saturday we had the pleasure of visiting a poultry farm in Tennessee with our extended family. I think my tot thought we were at a petting zoo, ha-ha! 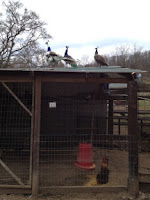 There was everything from chicks to peacocks. Besides the poultry there were other animals roaming around too, dogs, goats, etc. I witnessed a couple things I personally have never experienced before in my 31yrs. One of which I wish I had filmed! I watched a llama chase a donkey over a hill, then in defense the donkey back kick the llama in the neck. Have any of you seen this before? Another thing, one I could have done without was a chicken having its leg cut off! Luckily, I realized it wasn't a joke and distracted my tot while holding down my own vomit. Turns out they did it to try and save the chicken but still, ahh! 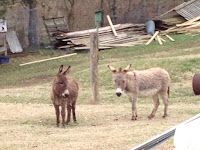 Overall it was a fun outing between a big family get together. Here are some pics for you to enjoy! Not sure when I'll post gain but this should tide you over for a little while.
Oh yeah... maybe I don't know enough about animals but have you ever seen a white peacock or a turkey with a blue face?
Email ThisBlogThis!Share to TwitterShare to FacebookShare to Pinterest