I was almost scammed today!!! Over the past few days I've been receiving calls from a strange telephone number : 0501  It's not a Dutch number, or even an American one; I kept letting the call go to the answering machine but they would never leave a message.  Finally out of curiosity I picked up, it was a woman with a thick accent telling me she worked for Microsoft and that they had been receiving error messages from my computer and she would like to help me.  At first it didn't seem so far fetched, sure I get random pop-ups and to be honest I don't know the last time I cleaned up my computer so I went along with it.  She had me type in all sorts of commands, prompting different screens to pop up.  All the while I found the call quite strange, I had never heard of Microsoft contacting customers warning of a possible computer crash.  Everything she explained seemed to correlate with my computer, she even had quite detailed information.  She had me check the "event viewer", and via the "run" command we went through things like "prefetch" and "cmd".  She even went as far as telling me my "clsid", it was all quite convincing yet I still had a bad feeling.  For those that know me, know I am a little on the paranoid side; it just wasn't sitting right.  Then she said she was going to connect me to a colleague of hers that they would help me clean up the errors and allow my computer to run faster and not crash.  (She acted as if my computer was on the brink of crashing).  Then her male colleague took over the call, also with a thick accent, and it wasn't Dutch.  He then asked me to use the "run" command to access a website, this really started ringing alarm bells in my head.  Before following through with the command I pasted the website into Google and I saw it was to remote access my computer.  Basically allowing him to take over control of my computer from wherever in the world it was that they were calling.  No way, just because he says he is Microsoft doesn't mean I am just going to give him control of my computer.  I further Googled the website he had given: www.ammyy.com 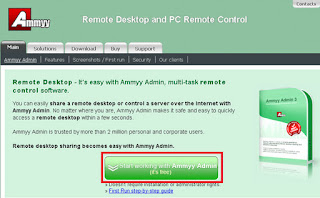 Ammyy.com is a legitimate company that helps people connect their computers, but his intentions were not legitimate.  I scrolled through Google finding endless forums about a scam explaining the exact situation I was in.  Still being on the phone he kept asking me if I had pressed the green button in order to download the product yet.  I then informed him of my findings, that all of the forums were calling it fraud/scam and that he didn't even work for Microsoft.  The man's tone of voice quickly changed, he admitted to being a third party but he wasn't going to give up.  Finally I just told him that if the error issues were true my husband would deal with them and then hung up on the scam artist.  After hanging up I started reading further into the scam, it has all sorts of names and has happened to people world wide.  They often target wives, I guess they think we're easy prey.  I am glad I wasn't naive enough to allow them access to my computer, but I do feel stupid for even allowing someone to rope me in as far as they did.  So this is just a heads up, don't fall for the AMMYY.COM SCAM, hang up the moment a strange person claims to be Microsoft and wants access to your computer.  Don't be foolish and allow them access or pay them any fees like I have read others have done!!!
Email ThisBlogThis!Share to TwitterShare to FacebookShare to Pinterest