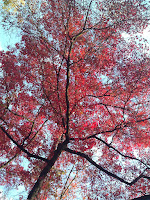 Well, Autumn (Dutch = Herfst) has been here for a while, but it's now really starting to show in the trees.  When I lived in Florida I didn't really appreaciate Autumn, mostly because it didn't look like this and because it meant the yard would fill up with leaves that I had no intentions of raking.  But now that I live in an apartment in the middle of a city it means, the city cleans up the leaves and all I have to do is step back and admire the view.  It took me a while to learn to appreciate Autumn though.  In years passed I was too busy to stop and take a look, shuffling back and forth between work and home was about the only time I looked around at nature.  But now that I am a Mom I look at things differently, it's fun to admire nature with my daughter and explain what's happening.  Plus trees can symbolize so many different things, from growth and life, to phases, to even family and its branches.  I used to have address labels with a tree on it, many of you probably received a card at one point with the label on it.  I liked it so much I even had stationary printed out to match.  I'm apparently not the only one in the family that appreciates trees, it turns out so does my husband. 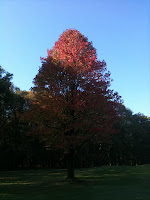 We were out with friends and one of them pointed out that Ryan had taken a photo of a tree and posted it on his Facebook page, I had no idea.  I burst out laughing and pulled my phone out, I too had taken pictures for this blog.  It was funny to know we even had this is common.  The golf course Ryan belongs to is beautiful, and I guess he couldn't resist taking the above shot while playing golf one morning.  And I thought he just went there to play golf and for the Good Ol' Boys Club.  Well, I can't end this blog without mentioning that the Dutch have an interesting way of collecting leaves.  In Florida we bag them and put them at the curb on a certain day, but here they set up fenced in areas where you can dump the leaves, then a truck comes by and sucks them up.  I don't know which is handier and it doesn't really matter.  I remember when we used to live in Best and there was a collection area set up across the street from us.  At the time I still smoked cigarettes, so everyday I was out on the balcony at some point, and one day I saw two boys on their bikes trying to knock the fences down and spread the leaves everywhere.  Being in my early 20's at the time, I felt as an adult I should do something.  My Dutch was extremely poor back then yet I tried to yell at them.  But in the end they just laughed at me and did it anyway, who knows what I actually managed to say to them.  I'll leave you all with a shot of one of these fenced in leaf collection areas. 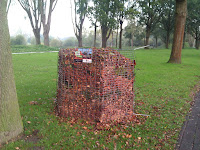