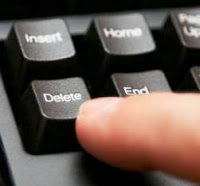 In this world of blogging we accumulate followers and we also follow others.  I use a Google blog and it makes this act quite simple.  You can easily add blogs to your "reading list" and follow them publicly.  Usually I am careful as to who I decide to "follow publicly".  I'll read the blog for around a month and then decide if it is a worthwhile blog, and that I don't mind letting other people know I find it interesting.  In the 9 months I've been blogging, I've never had to delete a blog from my list.  But the other day, I decided it was in my best interest.  I understand not all blogs are light hearted and I understand a majority of blogs have a special interest in mind.  But this blog blindsided me; at first it was fun and random, similar to my own, then occasionally they started delving into religion.  I can deal with that despite my own beliefs and/or non-belief's.  I am open minded, I like to hear other points of views.  But it was getting to be too much, too often.  Then the blogger started writing about American politics.  Again, I'm capable of having a discussion despite the party you choose to support.  I actually enjoy heated debates about politics and religion.  But the fun light hearted posts were coming less often, and the posts about things I didn't agree with came more and more.  Then at one point as I was getting irritated and ready to respond to what I found to be uneducated and emotionally charged comments to a political post (all in support of the blogger), I decided enough was enough.

It's like tv, if you don't like what you're watching, change the channel.  There's no sense in making a fuss, because there are people out there who do enjoy it.  Part of me wanted to leave a comment with my very different opinion, but I had to be mature about it and let it go (ha-ha, hence this post).  I can't decide what bothered me more, the posts or the comments.  Did I really want to start some kind of blog war, no... I don't want to get hateful comments on my blog just because I've ruffled a few feathers.  So I went to my "reading list" and removed that particular blog.  Now the posts are no longer in my face, neither are the ridiculous comments, and I am no longer associated with it.  You're not required to advertise your blog as religious or political, but a little heads up might be nice.  Luckily enough, I took the high road, but if others unknowingly stumble upon it, they might not be so kind.﻿
Email ThisBlogThis!Share to TwitterShare to FacebookShare to Pinterest