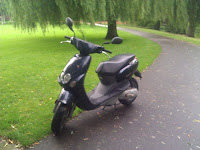 As you might have read in an old post, we have a scooter (moped, whatever you want to call it).  But we let it sit for so long we could no longer get it started.  After many talks we decided to take it to a garage and get it serviced.  While helping a friend move, my husband and his friends dropped by our apartment and loaded the old scooter into the truck and headed to the garage.  Within a few days we were able to pick it up; when I heard how little we had to pay I knew it hadn't been serviced, but merely jump started (possibly even a new battery).  I wasn't there so it was out of my control.  No matter what, it worked; even though it was quite rusty, had mildew in the trunk, not all of the lights worked, and had pieces hanging off it.  Everyday we started it to keep it running but we knew we needed to actually use it. 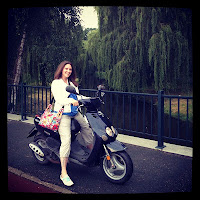 So one day while our daughter was at her aunt's we decided to take it for a spin for old times sake.  Before our daughter was born we often would just go for a ride around town or the parks, enjoy the weather, and each others company.  We stopped off at a couple stores, one of which being the pet shop.  Knowing we'd most likely be buying the puppy the next day we went ahead and picked up the things she needed.  You should have seen us trying to drive back home to drop off the massive box with the dog cage inside.  In front of the grocery store the scooter decided not to work anymore, we were close to home so walking it back wasn't going to be so bad.  But luckily for us it started just before we gave up.  Despite the drizzling rain and the risk of it copping out again we headed to the park.  We sat next to the canal chatting, taking funny pictures & movies, and snacking.  It was a fun afternoon, and looked forward to getting the scooter fully serviced for future afternoon jaunts. 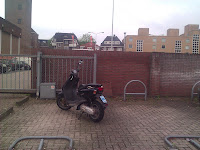 But life had something else in mind, we woke up Friday morning to find out someone tried to steal our scooter in the middle of the night!  My husband called on the way to work and said he thought he saw our scooter parked in the space next to his within our private parking lot.  I darted outside and sure enough the scooter was not at the bottom of the terrace stairs.  When I reached the parking lot I saw our scooter near the gate; I was glad they didn't take it but I wasn't sure what kind of damage they had done.  I pulled out my phone and took photos for the police and insurance company, not daring disturb the crime scene.  Quickly I realized the entire ignition was missing, and I was sure to add that to my conversation with the police. 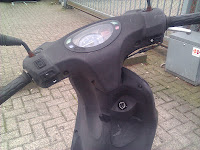 The police said that didn't send officers by for scooter thefts and that I'd have to fill out a report online.  Not wanting to upset the neighbors by leaving the scooter in their parking spot I went to move it.  But as I latched on to the handle bars, it computed that the thieves had managed to remove the ignition in order to start it, but when they couldn't get the steering column out of the locked position they gave up.  So there I stood, the steering column locked and turned to the left, without being able to use the key I could only push it in circles.  It was early in the morning and I didn't have it in me to work the scooter back up to our terrace.  I lifted it a few times, first the back then the front (they're surprisingly heavy) until it was in my husbands spot and there I left it until he arrived home.  I spent the next hour, filing an online police report, informing insurance, and putting up a note in the apartment hallway to warn the neighbors.  In the end we found out it's our own problem.  The police aren't going to do a thing, apparently insurance only covers an accident not theft, and the apartment committee said they'd do nothing and I should inform the neighbors myself.  So we had the scooter up and working for less than two weeks.  Now we have to pay the garage to come & pick it up, put in a new ignition, and do a general service, great!
Email ThisBlogThis!Share to TwitterShare to FacebookShare to Pinterest