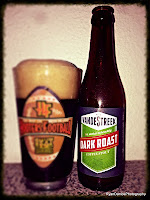 Beer is pretty common in our house, sure we have our favorites but we are also willing to branch out and try a variety of brands (generally those on sale, ha-ha!)  When one of my husbands employees decided to take a personal hobby to the next level and start brewing beer for the public, we jumped on board and ordered a 12 pack.  It took a while but a week or so ago the beer arrived!  I was pleasantly surprised to find two types of beer in the box, a pale ale and a dark roast.  Since it was Friday we popped the beers in the fridge and patiently waited for them to cool.  Now I'm not sure if the dark roast was supposed to be served cold or warm, but I'm not a fan of warm beer so we drank it cold.  (Probably should have asked the brewer.)  Both types of beer were nice but I took to the dark roast, maybe because it's a coffee stout.  One thing my husband had to warn me about was the alcohol content, apparently these beers are much stronger than the grocery store beer.  That was quite evident after even just one.  As far as I know, the beer is only available here in The Netherlands, and since it's a fairly new company they are now trying to get their product into bars.. who knows maybe one day it'll be on the shelf at the store also.  I wish the Van De Streek brothers a lot of success in their endeavors, proost (cheers)!
Email ThisBlogThis!Share to TwitterShare to FacebookShare to Pinterest