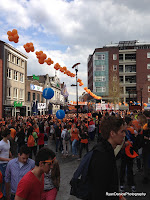 Queen's Day is was one of my favorite Dutch holidays.  (Since I've been blogging for a while now this isn't the first time you've heard about it.)  But this year's Queen's Day is the last one for a long-long time.  The Dutch Queen has stepped down and her son has taken over, so next year we'll be celebrating King's Day instead.  Not really sure if that will have an effect on the fun holiday or not, a holiday known for its markets, music, and of course orange clothing/accessories.  Since I've lived in The Netherlands I have participated in as many Queen's Day (April 30th) celebrations as possible, and this year was no different.  Well, the atmosphere was different, more subdued... maybe I'm getting older or maybe the Dutch were just more focused on the Queen's abdication.  Last year there were dj's everywhere and lots of space to dance and party.  But this year, there were a lot of tables and chairs, and the weather was cooler, all of which have an influence on the day.  It didn't stop us from having fun though.  And this year I lasted twice as long as last year!  Last year we found one great bar & dj and basically stayed there, this year, we were all over the place.  We hit up at least 4 or 5 venues and squeezed in dinner at an Indian restaurant in between. 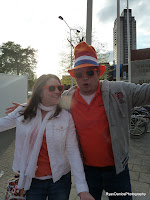 As usual I took a ton of pictures, with 7 people roaming mass crowds there was always something going on.  We were even separated for a while!  A couple holidays ago I realized it was quicker and cleaner for me to walk back to our apartment to use the bathroom than wait in line for a port-o-pot or use one at a bar.  First bathroom break went well, second one (after a few more drinks) ended up in a 30 minute search to find our husbands again.  I told my husband we should have picked a meeting point, oh well!  As I mentioned we had dinner reservations, I seriously doubted we would make it but we did, and it was great.  We even had half the restaurant to ourselves, thanks to a partition wall.  In all of my Queen's Days I've learned to stock up on the orange accessories early.  I bought a pair of orange sunglasses for 80 cents in the weeks leading up to the holiday and while we were in the middle of the crowds I saw someone selling the same ones for 10 euros, crazy!  I've also learned don't take anything you value, because you'll either lose it or get it so dirty you'll want to toss it afterwards.  You can only imagine thousands of people littering their food and beer cups everywhere, not quite nice to walk through by the end of the night.  I'll leave you with pics as always, and a big thanks to the old friends & new friends who helped make the day a blast!  And to my in-laws for babysitting!!
And of course, happy birthday Mom (next year the day is all yours because King's Day is on the 27th)!!! 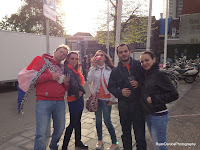 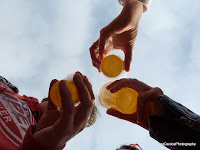 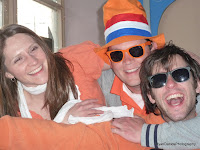 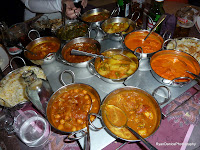 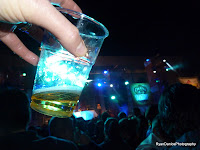 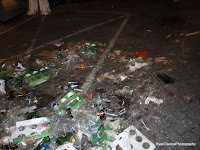