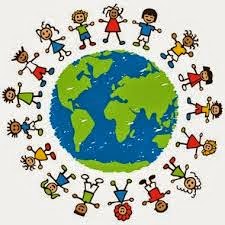 I promise I'll fill you in on our great summer, but I figured the best thing to do would be getting content on my blog again!  What's going on in my part of the world right now... well, we're on to a new phase.  Changes, changes...

See, for the last couple of years my daughter has attended Dutch schools.  Which re-immersed me into full-on Dutch culture.  As an expat your involvement with your surrounding culture can fluctuate, especially depending on who you associate yourself with.  Obviously if your kid attends a local school, well, you end up spending a lot of time with the locals.  As much as I love the Dutch or feel integrated, there are still moments when you remember you're foreign.  Even though Dutch & Americans look similar there are still underlying differences.  Besides the way I dress or my accent, interests also vary.  Standing at the Dutch school being one of the few foreigners was hard sometimes.  They don't mean to exclude you, which makes you have to work twice as hard at being outgoing and making friends.  They don't mean to stare or not quite understand what you're saying, hey Dutch is a hard language.  Needless to say it happens, and it can play with someones confidence.  All the while as a parent you're trying to keep your head up for your kid, be strong, and not show that you also feel anxious... telling them it's ok if the kids don't want to play or they're not being left out we just have different priorities.  I think both my daughter & I were looking forward to the summer.  A nice break to just be who we are for a while, Americans living in The Netherlands, living a mixed cultured life.

Since our daughter was born we knew we wanted to put her into the international school here.  My husband attended there, and many of his friends also.  The education level seems higher, it's in English, and it exposes the kids to the world we know - a world full of different cultures.  I think my daughter & I both took a breath of relief knowing we could speak English, finally being able to express ourselves as who we are.  (Your true personality doesn't always shine through when you're trying to communicate in a 2nd language, unless you're extremely fluent... often my sarcasm was confusing for the Dutch because they didn't realize I was joking, oops.  And as for my American husband, he's been dealing with this for over 25 yrs, it doesn't phase him at all.)

But then the 1st day of school came, and to be honest, it's a whole new set of challenges.  My daughter said it was hard to talk to the kids in class because they don't speak English.  All I could tell her was that they will learn, and never to forget how she felt at school trying to communicate in Dutch.  The school is beautiful and will offer many new opportunities for all of us, but as I stood there waving her off it truly sunk in that we're starting over again.  Very few faces we recognize, and with such a mix of cultures it was as if we were no longer in Eindhoven, wow there are a lot of foreigners in the area!  So now that we no longer stick out, except in the fact we've lived here so long and speak Dutch, it's now time to find out what international life is all about.  What was important to the kids & parents at her school last year is completely different this year.

Being day 2 of this new phase, I'm not really sure what it will bring.  All I know is we're going to do our best to mix our Dutch life & our international life.  Not losing old friends, and definitely making new friends.  Being careful not to immerse ourselves so much in this new international life that we forget we're still in The Netherlands, and it's their country, and we need to be sensitive to that.  So much is swirling through my head, I've had trouble sleeping.  Despite all of the major changes throughout my life, I don't actually handle change well.  All I can do is what I've always done... chin up, smile on my face, and sign up for everything to get the best involvement.  Wish us luck!