Is it possible, have I somehow developed a green thumb over the years?  In years passed I couldn't keep a plant alive longer than a few months maybe a year, tops, but something has changed.  Take a look at my pride and joys, they are over two years old! 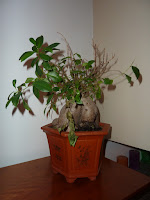 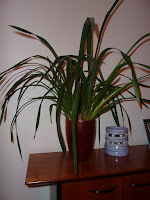 To be honest, I have no idea what types of plants they are, but they're alive thanks to me!  The first one I received as a birthday present when I was pregnant (2009) from our friends Linda & Bjorn.  It's survived summers outside and winters inside.  Every once in a while I see new growth, it's amazing!  And the second plant I received as a gift from Kevin (my father-in-law) when our daughter was born.  There used to be three beautiful orchids in the middle but they didn't make it.  People tell me that orchids can all of sudden pop back up after a while, but it has been a long while.  This plant was the decoration on our front window sill for years but eventually it grew so large that it was making it hard to see the t.v. from the couch.  So I decided to get a new plant for the window sill and this one moved to shelf (actually the entire living room was rearranged due to one plant, but that's another blog, in itself).  My mother-in-law (Liz) bought me the newest addition to the living room. 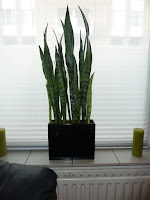 When I set the new plant down next to the old ones, I noticed how much healthier it looked.  But that doesn't matter, I still love my other plants.  Liz & Kim (Ryan's mother & sister) decided to tell me how shabby my old plants were and that I should throw them out, no way!  I worked hard to keep them alive, plus they're sentimental (everything is sentimental to me, according to my husband I am a borderline hoarder).  Since these plants have gone so well, I have bigger plans in mind.  When we get a house I want a vegetable/fruit garden (Dutch = moestuin).  Growing up in Florida someone in every generation of my family had some type of veg/fruit garden.  Maybe it's in my blood, maybe I can have a green thumb too, or maybe they all just got lucky because of the warm Florida climate!
Email ThisBlogThis!Share to TwitterShare to FacebookShare to Pinterest