I probably have no right to complain about people's driving decisions considering I do not have a license, but I am going to anyway!  As mentioned in previous blogs, I walk everywhere, while out and about I can't help but notice odd decisions people on the road make.  I don't know if it's legal to post pictures of people's vehicles so if my blog gets shut down you'll know why.  Also, if this happens to be you or your car, sorry but c'mon!  In one 10 minute walk I came across 3 situations worthy of taking photos (there's a big chance you'll see a follow up to this blog).
The first shot is of a man who decided to park in a non-parking zone vs. an actual parking spot. 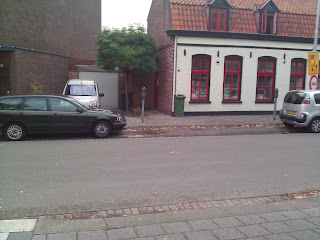 While walking along I actually saw him make the conscious decision to block a driveway (a non-parking zone with a large X painted on it) instead of parking in the open parking spot directly in front of him!  It makes me wonder what he was thinking, was he trying to avoid putting change in the meter yet risking a more expensive parking ticket, does he know the owners of the driveway, or does he not know the rules (he had a Polish license plate)???
The second shot is of a car frustrated with work traffic. 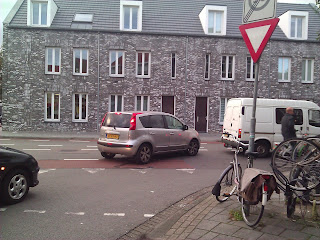 The traffic around them is at a stand still because of a light about a block away and this person decides to pull out halfway and sit there.  According to the laws they should be stopped behind the triangles on the road.  Instead they decide to block a bike path and also risk a ticket.  I understand people want to get home from work and some intersections can be frustrating but seriously.  It's not just rush hour for cars but also for bikes, now every bike and scooter has to swerve to avoid this car.  And for those of you that know the intersection, you'll also notice the black car in the corner of the photo is blocking a pedestrian/walking path.  This all might be understandable if they were both rolling through the intersection but like I said they're all waiting on the light to change.
The last shot for today is of a prize winning parker! 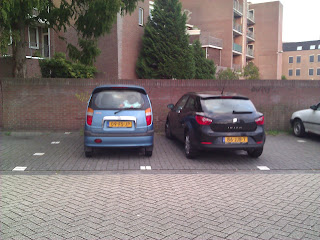 I think it takes effort to park this bad.  If you could see the light blue car from the side you'd see it is a dinky (small) car.  How on earth do you get out of your car and walk away leaving it like that, with one adjustment they'd be in the middle of the spot.  They obviously can park straight they just can't judge distance.  I also question the person next to them, why would you squeeze into the spot next to this car?  I hope for them the parking lot was full when they made these decisions.
I can think of a couple family members and friends that also make these kinds of decisions, so please don't take this blog the wrong way.  You are allowed to make whatever decisions you want, as I am allowed to laugh at them!
Email ThisBlogThis!Share to TwitterShare to FacebookShare to Pinterest