The dog debate between my husband & I has gone on for years now... mostly because of me, if he had his way we would have bought a dog a long time ago.  I like dogs, I do, and I'm running out of excuses.  Before we had a child the responsibility seemed too big (I knew I would end up doing most of the work).  First & last walks seemed dreadful, plus I had a full time job and there would be no one home with the dog.  Now that I'm a full time mother, I'm up most days before 7AM and I decide my schedule (for the most part).  Like I said, I'm running out of excuses.  One excuse reason, the biggest one of all, I'm allergic to dogs, even a lot of the ones people claim to be hypo-allergenic.  But the look on my husbands face when he plays with a dog or hears me shoot the idea down again is starting to mess with my head.  Now he's involved our daughter, who is also a dog lover... he points out how much entertainment she would get, his childhood experiences with dogs, and the fact we're not ready for a 2nd child.  So, I started looking, just looking.  I pulled out all the stops, I explained hypo-allergenic pure-breed dogs cost a fortune here in the Netherlands, I said we'd probably have to skip a vacation this year, I stooped low enough to say it will be harder to sell our apartment if we have a dog, but nothing deterred him.  Between my allergies and the small amount of breeders here, the list of dogs was short.  I showed him a few pics, knowing if I choose A he'll choose B, and what did he do... he picked the only dog on the entire list that I liked!  Damn!  I then started contacting breeders, running the risk we could end up with a puppy within a couple months.  But I had no luck, almost a year has gone by since I started contacting breeders.  Part of me was content, there was no dog to rush home to before it peed everywhere and the endless costs of dog food and vet bills didn't exist.  But part of me started wanting a dog, ahh!  I wouldn't say my past experiences with dogs pushed me, it was more my imagination (and my husband of course).  Then the other day one of the breeders contacted me; she recently bred her Irish Soft Coated Wheaten Terrier and hopes to have puppies by August.  For those of you unfamiliar with this breed here are a couple pics I found, and kind of how I imagine it to be (puppy playing out back / having his own seat in the car) : 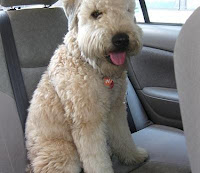 In the Netherlands, the breeders like to meet with you before agreeing to sell you a dog (might also be the same in The States).  So I spoke with her for a while, explaining our situation, listening to her explain the breed, and promising to set a date to drive up to meet her and her dogs.  After all was said and done my husband tells me he isn't sure if this is the dog he wants, WHAT!!!  No matter what I am going to force the three of us to take a 2hr round trip to go see the breeder.  You never know, I might be allergic, they might scare our daughter, or my husband might not like them at all... and the dog debate goes on.  (Just in case these pics didn't sell you, check out the last pic on an old post - Dog Sitting.  It's what sold me!)
Email ThisBlogThis!Share to TwitterShare to FacebookShare to Pinterest