I'll clear something up to start, schmownies is not a word, just liked the ring of it, brownies-schmownies.  So, this morning I went to a Mums & Toddlers coffee morning / play date with my daughter.  At one point I questioned if we'd ever get there, despite having a navigation system in the car I seem to always get lost.  And as so often, I'm at the brink of giving up, turning around, and going home, when I manage to find my way.  Apparently major roads and neighborhoods change often enough for the navigation to give up on me, and personally I have little sense of direction.  But needless to say I made it to the coffee morning, even though I was 30 minutes late.  The last time I attended one I arrived empty handed, I didn't want that to be the case this time, so I baked brownies.  To many of you that seems simple, but for me, it was a first.  And the bar is so high when it comes to M&T's, some of these women bake well enough they could open their own shop.  I was embarrassed to admit I struggled to make it, much less that it was a box mix.  Before you start assuming things, I do cook, I wouldn't say I'm a natural, but I'm generally capable of following a recipe.  I can even make a banana cake from scratch, but I do that about once a year.  I wouldn't say I'm handy with a mixer, especially since I'm a bit clumsy.  Things seemed to go well at first; dumping things in a bowl isn't too hard.  But then came the mixer, I was told it works best on full blast, so I stuck the beaters in the bowl and unleashed full power.  Immediately chocolate powder filled the air and splats of chocolate flung onto the counter and tiles of my kitchen.  But I didn't give up, the box said to mix for a full 3 minutes.  At one point I realized there were a lot of ingredients on the side of the bowl and I was going to need to use a spatula to push it down (because when I put the beaters on the side of the bowl things just got messier).  I was holding the spatula with my left hand, and that wasn't working out so well, apparently I'm not ambidextrous.  After managing to switch hands, while still blending, things seemed to start going smoother. 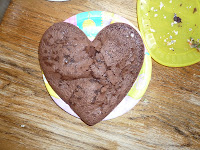 The only cake pan (silicone) I have in the house is heart shaped from the one time I made my husband a cake for Valentine's Day, the women were just going to have to deal with it... I didn't think using the silicone loaf pan that I use for meatloaf was the right alternative.  Surprisingly I managed to dump the brownie mix into the pan without a disaster, then it was time for the chocolate sprinkles.  I wouldn't say I distributed them evenly but it worked.  I baked it for the allotted time, but wasn't convinced it was finished.  I showed it to my husband (the better cook) and he said to give it 5 more minutes in the oven.  I gave it about 10 because I forgot about it; dashing to the kitchen I managed to get it out in time.  There was a back-up box just in case but I didn't feel like going through the ordeal again.  When I took it out it had risen but unevenly, how did that happen?  Oh well, at least I didn't burn it.  I wouldn't say my presentation was great either, an uneven heart shaped brownie plopped onto a leftover bunny paper plate from Easter, with chocolate icing only covering parts of it.  My parents are probably cringing, they go above and beyond when it comes to food presentation for get-togethers.  Some of the women did try it though, they were nice and said it tasted fine.  And they also said the dark soft stripe in the middle of the brownie was normal.  My daughter on the other hand spat it out.  I think next round I'll just pop over to the baker like my husband suggested, but at least I tried.
Email ThisBlogThis!Share to TwitterShare to FacebookShare to Pinterest