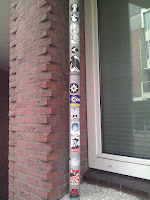 Well the drain pipe outside of our apartment has turned into sticker central, modern day graffiti.  I don't mind graffiti if it is done well and in the proper locations.  And I don't mind the stickers on the drain pipe either (this is not an invitation for more).  Now if someone was tagging the front of my house in the suburbs I might not be so pleased, but the stickers seem to liven up the front of an otherwise fairly drab apartment front.  All along our street, a busy road in the center of a big city, you can find these stickers... all over town actually.  Every time I pass one I wonder who did it, what does it mean, and how in the world did they even get it up there.  Often as I walk by I think, today I'm going to take a photo and put it on my blog, and most days it's just a fleeting thought.  But today, today I did it. 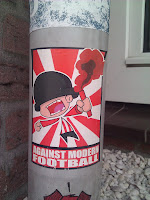 I stood outside of my apartment snapping shots of a drain pipe, I must have looked a little strange, but who really cares.  Like so often in life, once something is brought to your attention you start seeing it everywhere... much like the light bulb sticker or the girls face.  Wondering what they mean, I headed over to Google Images (love this feature) and of course answers started popping up.  Well, answers, not exactly, let's just say I'm not the only blogger to have taken notice.  Some people say they're soccer football related, others blame the Stickerkoning (aka Sticker King), and some people don't give explanations just a lot of examples.  When I was a teenager my bedroom door looked much like this drain pipe, was it art or was it just another way to leave my mark? 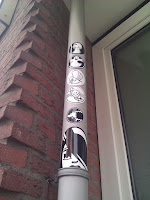 Probably both.  Our drain pipe is now host to 14 different stickers... there's duck dude, weird ghost guy, eye with a hat, light bulb, wolf/sheep, shiny hair girl, flower or star, European Student Vereniging, Mr. Cat, one-eye guy, Nostradamus, the faded one, armed hooligan, & creepy monster.   And yes, I just named them.  I can't imagine what it would cost someone to produce so many stickers just to tag the town... but people will invest anything to advertise - it might just help to know what they're advertising though.  Maybe it's a secret society and they have to follow the stickers to get to their lair (maybe I've seen too many movies).  As I write this my brain is churning, I'm going to have to investigate some more.  Cue the suspenseful, ominous, dramatic music... picture footsteps and a magnifying glass.  Voila!  And the only thing I found out was that Mr. Cat is actually referred to as Gato.  Oh yeah, and apparently the combination of stickers is important, wow do I feel out of the loop (do I even want to be in the loop???).  Anyway, just thought you all might enjoy another random, fleeting thought of mine, and if anyone can explain the stickers to me - I'm interested.
Email ThisBlogThis!Share to TwitterShare to FacebookShare to Pinterest