Women supporting women.  Until I became a stay-at-home mom I didn't really see the importance behind women supporting each other.  I had a hand full of female friends and was content.  Then when I entered this other world, this world of creating my own schedule and choosing who I spend time with (not 40hrs a week of being forced into confined spaces with colleagues), it started to sink in that I needed to branch out.  And that the rules and guidelines I once adhered to no longer applied.  Many women choose not to stay home with their children because they feel it's lonely and secluded, but that's a choice, it doesn't have to be that way.  All it takes is putting yourself out there and being open to new experiences and strangers.  Signing up for activities with my daughter has opened many doors to new people and experiences.  And in this quest to branch out, to get involved, to keep my child entertained and well-rounded, I discovered there are a lot of women just like me.  Women who pull together to help each other through phases of life, a support system if you will.  It can be as simple as meeting in the park with your kids (the more the merrier) to helping someone find a plumber or just feel they have some connection outside of their home.  This 2 1/2 yr process led me to two wonderful experiences this past week, ones that may not have happened if I hadn't dared to branch out, if I had chosen to remain secluded, a foreign SAHM locked away in a house. 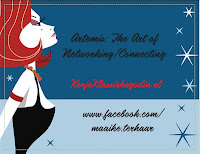 The first was a women's workshop hosted by Maaike ter Haar (we met through my daughter's preschool).  She firmly believes in networking as a mother, it was something that hadn't really crossed my mind until she pointed it out.  But she's right, just like people striving for a career network so do we.  Some of you might chuckle, how is meeting for play dates considered networking?  It is, you meet new people with new ideas from new places, all of which open your world even further and theirs too.  At this workshop alone there were 5 different nationalities.  Maaike took it a step further, saying how hard it is for women to try and manage it all (kids, the house, a career, hobbies, etc.) and that sometimes we just need to support each other and work together instead of judging.  And her idea of bringing women together Dutch and foreign is great, we can all pull together and share our experiences and help each other grow.  This particular workshop was more of an introduction, getting to know each other, where we are in life now and where we'd like to be in a few years.  I look forward to her next workshop.  Because Maaike takes an interesting approach, she wants us all to find our inner Goddesses (our inner strength), to believe in ourselves, and not let the world place us on the back-burner.  I thoroughly enjoyed the judgement free approach, and I felt braver and more confident when it ended.

The second event that ties in to this "Supporting Women" post was an art exhibit.  Through Mums & Toddlers I have met a lot of women, women that need support, women that feel very lost in a foreign country.  But I have also met a lot like me, that have lived abroad for years and that call the Netherlands home.  One of which is Emma Skeet, an artist and a mother to 4 kids.  She's a great example of someone who can manage it all.  Emma and a few other women joined together to create an art exhibit, talk about branching out and putting yourself out there.  Emma provided the paintings, and there were also photographs and furniture, all tucked into an old chapel.  I missed opening night, but I told myself that I wanted to support her, that I wanted to make sure I attended the exhibit and sure enough my daughter and I made it on the last day.  They were brave enough to put themselves out there, and all they needed were people to show up.  I was glad I did, it was my daughter's first art exhibit and it was wonderful to teach her to appreciate things other than toys and tv.  Emma had four beautiful pieces on display, and as I stared at them all I could think about was the time and dedication that went into the paintings.  The layers, the textures, how much they could say without saying anything.  I also thought about networking, if neither one of us had joined M&T's I wouldn't have been standing under the vaulted ceilings, stained glass windows, holding my 2 yr olds hand taking in a well-done art exhibit.

So often women can be catty and work against each other, it's a pointless battle.  We're better off uniting, helping each other, and being a lot less judgemental and a lot more open.
Email ThisBlogThis!Share to TwitterShare to FacebookShare to Pinterest