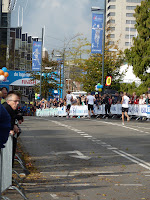 Every year in October the city I live in hosts a large marathon.  There are 6 events during the marathon... some people run 42.195km (around 26 miles) while others run half, and there is even an event for kids (2.5km/1.5m).  Well, I am proud to say yesterday a good friend of mine joined the marathon!  (Hope you didn't think I'd say I ran a marathon... I walked about 6.4km/4miles today & jumped on bouncy castles in between and I am aching and in need of rest!)  My friend (Linda Roos) joined the Estafettemarathon; during this event 4 runners split the gruelling 42.2km.  She had the last leg of the event which put her finishing the marathon near my house.  Since my husband had to work on Sunday - bummer - me, my daughter, & Linda's husband set out to a not so crowded spot near the park and finish line. 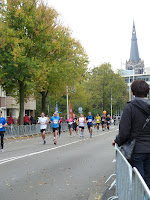 Luckily I know my way around the center of town and we didn't have to fight any crowds.  Linda estimated she'd cross the finish line around 1:20PM.  I knew better, you have to factor in the other runners plus she has never ran the 11km portion of the marathon before (to be fair, she did finish during her estimated time).  We arrived around 1:30PM and I gave her 30 minutes because I needed to put my toddler to bed.  But when 2PM rolled around I couldn't leave.  We've been friends for round 8 years, and to be honest she's participated in everything from dance shows to parades and I often let her down and didn't turn up.  So this time I was determined to cheer her on as she neared the finish line.  Being a typical male her husband had little information to help, he at least knew what she was wearing, so that would help us keep an eye out for her.  But quickly I realized all team runners were wearing team shirts, so she wasn't dressed in all black.  He did know the team she was running for, so we were on the lookout for a neon green shirt.  Turns out she wasn't wearing the black hat he mentioned either, but I still managed to spot her. 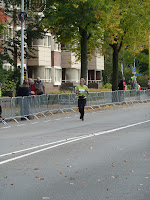 Immediately we started jumping up and down, calling her name, waving balloons, but she was so focused (and wearing earphones) she almost missed us.  Luckily just as she passed she saw our charades and sent us a smile letting us know she'd survive.  My husband walked up with our dog just after that, he passed Linda and didn't even know it (again, men)!  We all met her after the finish line and she was proud to show off her medal but was obviously exhausted.  We lent her husband our bike so he could charter her around the center to drop off the team medals and bring her back to their car at our apartment.  There was no way she was doing any unneeded walking after the marathon and the center of town was closed off to cars, so the bike worked out perfect.  I was happy to support a friend and happy to take my daughter to the marathon again (it's become a tradition since her birth). 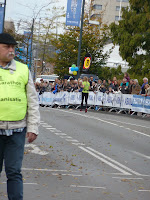 Just a side thought, have you ever been to a marathon?  I love watching all of the different running styles, some make you chuckle, some make you wonder how they even managed the event, and some are just obviously life time runners, but no matter what, they all did it.  Congrats to everyone who participated in the Eindhoven Marathon yesterday!
Email ThisBlogThis!Share to TwitterShare to FacebookShare to Pinterest