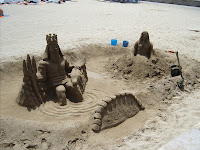 In 2008 we did a lot of travelling, since then life has picked up and there have been a lot less journeys throughout Europe.  One of our destinations in 2008 was Sitges, Spain.  Our apartment was located where the beach and golf course met, so it catered to both of our wishes.  Besides the beauty of the city itself, there were also great shops and restaurants.  But I have to admit, we're on a completely different time schedule than the Spanish and we missed a lot of things because they were closed. 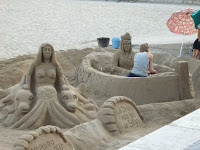 During our vacation we noticed a few men building sand sculptures, they were huge and detailed, and very time consuming.  After passing them a few times, we ended up joining them for an evening.  Apparently during the night they sit and guard their creations.  No wonder, because these sculptures earn them a lot of money in the weekends.  The small change from tourists adds up quickly, according to them above €1000.  We laughed, we drank, we listened to them strum the guitar and sing, it was a little surreal. 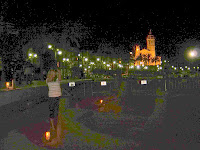 And then at some point in the night, I realized we were part of the tourist attraction.  During the day it had been us standing there taking pictures of the sculptures from a distance.  Now we were joking and running around the sculptures, even climbing inside the sand boat to take pictures.  Sitting there staring off at the promenade, I couldn't help but capture the moment, the tourists were taking pictures of us (and the sculptures of course).  It was a night & vacation that we will not easily forget! 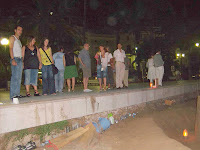 We met so many friendly people, Spanish & foreign.  At the golf course we teamed up with two locals, who after a round of golf invited us to join them at the clubhouse.  At the apartment/hotel we met an American staff member who gave us tips on places to check out in the city.  And on the beach we met the travelling artists, who came from all over Europe.  We ate some of the best tapas ever at a small restaurant on a side street.  And funnily enough even found Duff beer (we're big Simpsons fans) at a bar.  I'd definitely recommend this vacation spot to anyone (well anyone that's open-minded).  As for us, I doubt we'll go back, only because we try to find new spots and new adventures each vacation!
Email ThisBlogThis!Share to TwitterShare to FacebookShare to Pinterest