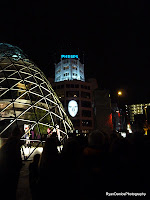 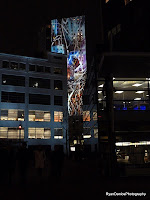 Living in a large city definitely has its perks, as in there is always something interesting taking place.  Right now Eindhoven is hosting GLOW.  It's an incredible display of art projected around the city onto a variety of buildings.  Besides just light shows, there are also many odes to artificial light and its capabilities.  GLOW brings people from all over... once the sun sets hordes of people wander around the city gazing up at the displays. 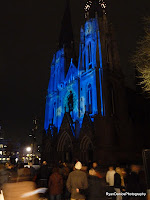 It's also a great opportunity for photographers, so besides crowds oohing and awing, there are also tons of people running around with cameras and tripods.  Since we live in the center it would be pure lazy if we didn't step out our door and participate.  One evening after dinner I realized my husband would be late and there was still around an hour before my daughters bedtime, so we bundled up and headed into the crowds.  At first my daughter was impressed with the street lights, she's not often out after dark.  But when we actually neared the displays she was overly impressed. 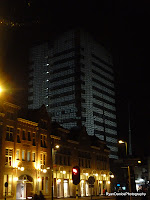 Some of the displays combine poetry & lights, some music & lights, and others, just art & lights, each one interesting in it's own aspect.  We saw around 7 displays and my favorite this year has to be the garden of lights on the Wilhelminaplein.  My daughters favorite has to be the display on the cathedral, she told her dad all about the people dancing on the building (what she didn't realize was that it was a conductor and parts of an orchestra, but I will not burst her bubble). 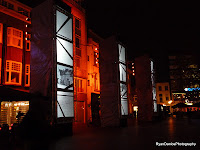 Sometimes the displays are too artsy for me, I remember last year watching one (a combo of poetry and light) waiting for something to happen but that was it... someone reading text to dramatic music as it flashed by on a wall.  This year they also displayed and read text, but the words were projected over a huge building giving it more of an affect.  If you're in the Eindhoven area, I recommend joining in the fun.  It's free, it's interesting, why not take advantage of it.  GLOW runs from November 10th-17th.  I didn't get the best photos, I was using our small camera at night, but I wasn't there for the pictures anyway. 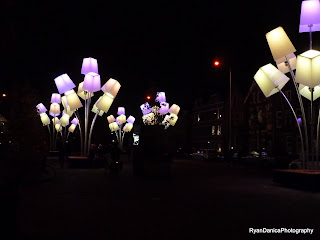