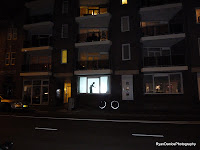 Besides the official GLOW taking place in Eindhoven, there was the unofficial GLOW off.  This is where amateurs make their own venues and display them during the last day of GLOW.  Us and some friends decided we wanted to make our own film so that we too could participate.  One weekend we set up a make shift studio in a friends backyard.  This including white sheets hung between ladders for a backdrop... an iPhone for filming... a few props inc. a wind machine... and a computer program to turn our images into silhouettes.  Again I'll reiterate we're amateurs.  Living downtown gave us the prime location to display what we created.  So after an afternoon of filming and some 10 odd hours of editing on the computer (thanks Mike) we had a short film to air.  To be honest, I expected loads of people standing outside of our apartment watching the film we were airing on to our front window.  But we only had a few passerby's.  Sure the larger light displays in town were nice, but we were easily comparable to the smaller ones.  Needless to say we had fun and made a night of it!  Unfortunately I didn't get the best photos but I do have the movie for you!  The film could have used a bit more tweaking but we had already put enough time into the one night project.  The photo I included above gives you an idea of what the movie looked like displayed on our window.  The funniest part of the entire night was when the neighbors above us couldn't figure out why there were people outside taking pictures and pointing... maybe we should have warned them, oops!
Email ThisBlogThis!Share to TwitterShare to FacebookShare to Pinterest