In years past my husband & I watched American Idol, then there was a bombardment of these types of shows (I can list 3 right off the top of my head).  So, naturally we lost interest.  Then while visiting The States in 2011 we tuned in and found a new appreciation for the show.  We even followed season 10 completely, the talent was great, even though neither one of us are huge country music fans.  We also watched season 11, I even picked the winner, though my husband was convinced Joshua Ledet should have won.  This year we were side tracked and decided to give The X Factor a chance (US version 2nd season).  The first show I watched didn't sell me, it all seemed too staged.  We wanted to watch the talent and instead it was endless backstory, even our toddler complained.  But once you start watching, curiosity grows.  All of my favorites were kicked off early into the live shows, Lyric 145 & Beatrice Miller were awesome!  Then as the live shows continued we realized the lack of talent, X Factor didn't hold a candle to the talent on American Idol.  Then when it was down to the last 4 contestants (inc. 2 groups) we just stopped watching.  Then I read on the news Tate Stevens had won.  He seems like a nice guy, probably has fun singing for his friends, but I'm sorry, he wasn't good enough to win the 5 million dollar contract.  We've seen potential country singers at work on American Idol and they would have blown him out of the water.  If I had to choose out of the last contestants the only one with talent was Carly Rose Sonenclar, she was just on the boring side.  But I bet there's already a broadway show waiting to hire her.  We gave The X Factor a chance, and I can tell you, we will not be watching next year. 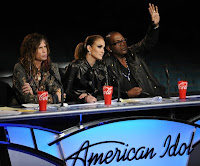 If you're wondering why we didn't follow American Idol this season, it's because I just can't understand why they chose the judges they did, hopefully next years selection will be better!  Despite constantly promoting their music, we liked the trio from season 10 & 11.
Email ThisBlogThis!Share to TwitterShare to FacebookShare to Pinterest