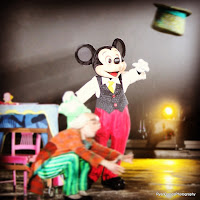 Yay, after a long wait it was finally time for the Disney On Ice show on Sunday!  A couple months back my husband & one of his friends teamed up to score points with the wives & kids... they bought 2nd row seats to Disney On Ice!  Not only did they treat us to a quality show they were also sure to buy the kids fun things during the show, like spinning Minnie lights, Mickey binoculars, Tinkerbell snow cone cups & Disney balloons!  And after the show we all popped into a pizzeria before picking up the dogs from the in-laws. 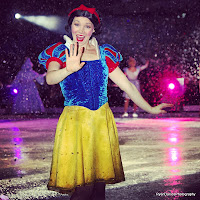 The show was 90 minutes with a break, which was perfect for the kids.  And like expected, Disney did a great job.  My only issue was it was in Dutch and I wasn't able to sing along to the songs (I understand Dutch, just don't know the Disney songs in Dutch).  But when Beauty & The Beast hit the ice, I was singing in English no matter what.  Even though many of the Disney prince & princess aren't original, they're still magical.  Every time I see them I think of the endless great movies I watched repeatedly as a kid.  The ones I get to watch again now that I have a daughter.  So many of the great fairy tales have inspired my writing as an adult. 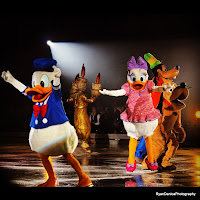 Besides Disney royalty their were the usual characters, the only ones my tot seems to care about... Mickey, Minnie, Donald, Daisy, Goofy, & Pluto!  There were a lot of fun themes touching on holidays, from birthdays to Christmas, and through this they were able to incorporate many more characters.  I think the brochure said there were 50 in total.  We did miss Rapunzel & Flynn from Tangled, though! 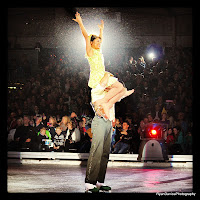 During the 90 minute show only one couple fell, ouch!  A lot of it was skating for fun, but there were a few couples that were able to perform incredible moves.  The show wasn't just for the kids because the moms & dads were getting eye fulls of extremely fit skaters all the while.  My husbands favorite was Princess Jasmine, her outfit did enhance everything.  And mine had to be David Kawena from Lilo & Stitch, it was what he wasn't wearing that was so nice, ha-ha! 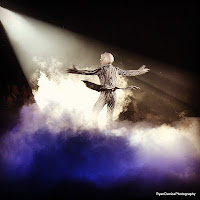 When I lived in Florida I took Disney for granted.  The money and effort they put into everything they do from shows, to movies, to even the theme parks, is top quality.  They make dreams come true for young and old, thanks Walt!
My husband took so many great photos, but I'll only include a few.  Thanks again to my great husband for a wonderful day!
Email ThisBlogThis!Share to TwitterShare to FacebookShare to Pinterest