Goodbye (sayonara) trusty stroller!  Our heavy duty stroller finally bit the dust yesterday.  I can't actually complain considering what we put this stroller through.  We bought the Mutsy Transporter over 3 years ago and we used it to its fullest.  At least once a week it made a journey through rain, snow, or sunshine to and from swimming class (3-3.5miles).  It went on endless walks, and since I don't have a car it was also my tots mode of transportation for everything from playdates to the playground.  It also totted full groceries and purchases, I'm surprised the mesh basket underneath held up as long as it did.  It was a comfy place for my tot, even when she technically was too old and weighed too much for it.  We even used the stroller to the point there wasn't any tread left on the tires. 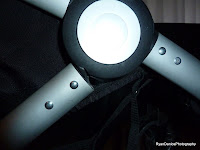 Last week on the way to swimming class I pressed down on the handle bar to pop the front wheels up in order to get the stroller and tot up on to the sidewalk and I heard a pop.  I could see the stroller was leaning a little to the left but it was still working.  At that moment I knew we wouldn't have much longer together.  Then yesterday before swimming I mentioned it to my husband, probably manifesting its end.  On our trek to and from swimming class I made sure to only use ramps and avoid having to lift her up on to the sidewalks.  Luckily I did, because a few minutes from our house, on the return journey, I had no choice but to pop a wheely and sure enough the right side of the frame broke also.  If I hadn't have been in a hurry I would have told my tot to hop out and walk, but instead I lifted the back end and trucked it home (she was basically in a recliner at this point).  I was so glad this happened close to home, otherwise I'm not really sure what we would have done.  Before leaving for swimming I ran a lot of scenarios through my head and most of which were quite inconvenient.  It's not like it's an umbrella stroller and can be tossed out easily.  And after swimming she would have been too worn out to walk that far anyway.  Again, we were very lucky! 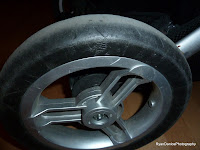 When our girl was just a baby the stroller had a bassinet attachment (and also attachments for the car seat), I saved them thinking we could reuse the stroller for the next kid.  But at that point so early on in my daughter's life I had no idea what I was about to ask of this stroller.  I feel like the Mutsy Transporter went above and beyond my expectations, and I would defnitely buy another one in the future.
Sayonara stroller!
Email ThisBlogThis!Share to TwitterShare to FacebookShare to Pinterest