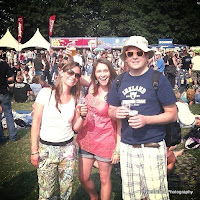 About a month ago we decided to buy tickets for Bospop (a classic rock festival in Weert).  In the mean time we've been quite busy, and questioned if we were even going to be able to go.  Sometimes planning too far ahead can actually work against you!  I'm not exactly sure who decided it was a good idea to go to a music festival the day the husbands returned home from a business trip in The States but it happened.  Surprisingly enough the men actually lasted until late into the night, probably thanks to an afternoon nap & Red Bull (long live energy drinks).  We didn't arrive until late in the afternoon, which turned out to be a good idea... we didn't get baked by the sun in the open field all day and we were able to stay almost until the very end.  Bospop had two stages set up, a large stage for the bigger acts and a tented stage for all the acts in between.  It was actually funny watching the people rush back and forth.  When we first arrived we did the usual wandering around, people watching, scooping out the event, hitting up the beer & food stands.  But eventually we sent up camp, we were close to the bathrooms and trash cans (convenient), we could see the main stage, and yet we were out of the way and not constantly being stepped on. 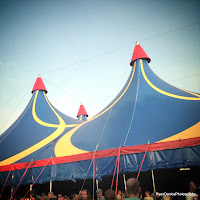 Luckily we brought two small towels, just enough for 4 butts, but usually there was always 1-2 people standing.  One of the most memorable acts was Amy MacDonald.  I only knew one of her songs but I must say I enjoyed her entire set, imagine Mumford & Sons just with a female lead.  I love it when artists can perform live as well as they do in the studio.  During her set a woman decided to pass out next to us, my husband & I were totally freaked.  The paramedics laid her on the ground, then eventually took her away, we had to turn our backs, we didn't like watching someones grandma laid out in a sundress flashing the crowd.  Once she was gone we let out a breath of relief and focused back on the performance.  Then she came back, what!  Who passes out then returns for more!  Other large acts were Roger Hodgson & Band and the night rounded off with Crosby, Stills, & Nash.  In between we were able to enjoy a popular Dutch act (Rowwen Heze), it's popular because the Dutch goes crazy and throw beer around during the performance. 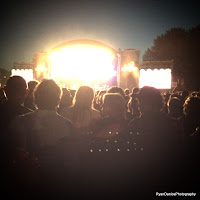 When I first heard about it I seriously doubted we would participate, but of course as the night went on and a couple more drinks later, we were ready for the craziness.  Another funny thing was we ordered a pizza, sounds quite simple but apparently everyone was ordering just slices, you should have seen their faces when we said we wanted an entire pizza.  Then the trek from the pizza stand back to the men was also a feat.  Try stepping through hundreds of feet and blankets while getting hooted at from the crowd.  When we finally arrived with the pizza our husbands asked, "and where's the beer?"  Typical, ha-ha!  Luckily at the end of the night our friends sister picked us up, this saved us a bus ride, train ride, and a walk home, thanks!!!  And to top it off the only thing we lost were the towels, I think at the end of the night we decided the old towels weren't worth it.  It was a relaxed music festival, thanks to the crowd... we'd definitely party with classic rockers again!
Email ThisBlogThis!Share to TwitterShare to FacebookShare to Pinterest