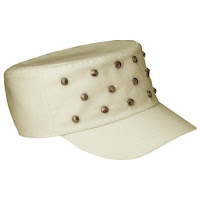 Around 6 months ago I wrote about a hat I purchased to get me through the winter, but I also mentioned my hopes for a summer cap.  Well, thanks to my b-day the wish was granted... not only did I get one military cadet cap but my mom bought me two!  I was pretty set on the pink hat, but I of course sent multiple suggestions so I wasn't actually sure what would end up in my b-day package from The States.  I was of course immediately over the moon with the pink hat, and it's come as quite a surprise but I'm wearing the beige conductor hat equally as much.  Being that it's not a neon color it actually goes with more summer outfits, should have known, thanks for thinking ahead Mom!  Either way, I am enjoying both caps.  They're great for... the hot summer days when I just don't feel like putting on the make-up I know will melt off in minutes... when I need to run an errand but just haven't had time to wash my hair yet... sprucing up an outfit for a festival or a day outside... or even for trips to the pool when my hair is pulled into a messy ponytail!  Obviously I'm getting a lot of use out of them.  And wearing hats has seemed to rub off on the family, instead of toting sunglasses around I've noticed the tot and hubby also packing hats for sunny day trips. 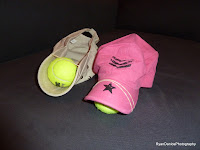 Being that I'm from The States, you could even narrow it down to The South, I of course had to get the hats in shape before wearing them.  This meant bending the bill, can't stand a flat bill!  It was pretty simple, I put a tennis ball under the bill, wrapped a rubber band around it, and let it sit over night.  Voilà, the next day the bills were rounded (I'm even considering a round two).
I don't see many Dutch women in hats unless they're exercising, where I come from in FL hats were pretty common, what about in your area?
Email ThisBlogThis!Share to TwitterShare to FacebookShare to Pinterest