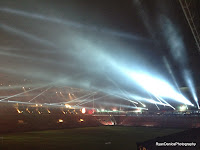 We managed to see GLOW before it wrapped up on the 16th... some how schedules aligned and the weather fairly cooperated!  We were able to make it an extra special night by teaming up with friends & their kids and getting dinner reservations at the local soccer stadium.  What does soccer and GLOW have to do with each other?  Well, this year one of the light shows was presented at the PSV stadium, and because we ate there we were allowed to use special seats, avoiding the crowds, getting a private view, and we could watch the show repeatedly (the kids did)!  And we also fulfilled our daughters wish of visiting the inside of the stadium (the points are rolling in). 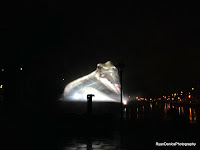 Besides the large soccer themed light show at the stadium, we were able to hit up 5 other displays before the kids collapsed.  The way the event route was set up this year not so many displays were located within child walking distance of our apartment.  So in order to see the group favorite at the end of the night we all hoped in my husbands SUV and drove to where the dragon/sea monster was situated.  There were quite a few attractions we would have liked to have seen but between the weather, distance, and hour, we had to end the night.  Needless to say the dinner and VIP show at the stadium pleased everyone enough it didn't matter.  As always I have pics for you, please excuse the quality, this year I only had my phone on me.  And don't forget to check out last year's post also (GLOW 2012). 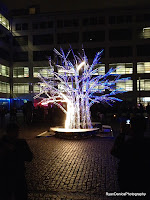 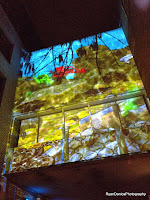 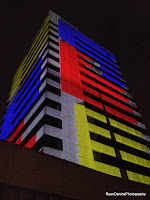 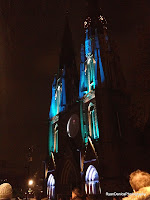