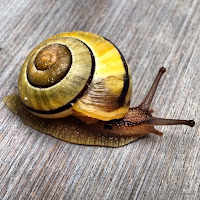 Do any of you have a snail or creature in your yard that has decided to make it officially their home?  Apparently we have a pet snail!  The snail decided to show its face about six months ago.  We were preparing our terrace for a bbq and when I lifted the cover on our picnic table there was a snail in a beautiful yellowish shell.  Immediately I grabbed my phone, snapped a pic, and ever since it has been one of my favorite Instagram pics.  Then a good few months went by before it turned up again, this time in one of our plant containers.  We accepted its presence and occasionally my husband would move it hoping to make it a little happier, maybe it would be more interested in the carrots than the weeds.  After my daughter saw the movie Turbo, her interest in the snail grew and we also decided to name it Turbo, just like the racing snail in the kids movie.  The other day my husband was clearing off the terrace to clean it with the high pressure hose when our daughter said, "hey, there's Turbo!"  Turns out my husband had stepped on it, but some how it survived (similar to the movie).  And yesterday before my husband went to play golf, he found the snail in his golf shoes which he often forgets outside.  And without telling me (I wasn't home) he placed the snail in a mug on the kitchen counter and left for golf.  When I returned home last night and started tidying up after putting our daughter to bed, I noticed the mug and tossed it in the sink not knowing there was a snail inside.  I didn't get around to clearing the sink until this morning (hey, it's weekend). 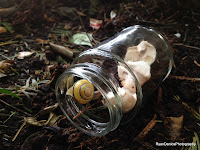 After loading the dishwasher I grabbed the wash cloth so I could finish up the dishes that didn't fit.  And when I lifted the cloth from where it was draped over the faucet I realized Turbo was hiding in the upper corner of the sink.  Naturally I freaked out and grabbed my camera again.  (Unfortunately the sink wasn't clean, so I will not be showing you those pics.)  Maybe other people dare touch snails and creatures, but not me.  I was going to leave the snail until my husband could deal with it (I was even starting to think he had set me up to see how long it would take me to clean out the sink, ha-ha!)  But when the snail decided to start creeping from one basin to another, I knew I had to do something about it.  Didn't want the little thing to get into any salt or sugar, or spread germs of course.  I have been holding on to some glass jars thinking about collecting bugs or worms for my daughter and now one had an official purpose!  It didn't take me long to collect different types of soil from containers on our terrace, but the real question was how to lure the snail.  (Keep in mind my 4yr old is watching everything.)  We hit up Google to see what snails eat, and luckily we had mushrooms in the fridge I didn't mind using.  After breaking one up and shoving into the small jar half full of soil we kept placing it in Turbo's path but again and again it avoided the jar.  Then finally it curiously crawled inside... YES!  Once it was safe inside I opened the door to outback and carried the jar & snail back out to the terrace.  My daughter was very impressed that we gave it a little house.  (Again, I took pics to share with everyone!)  I doubt the little snail will be in the jar the next time we check, hope my daughter is not too disappointed.  And then once we were back inside, I scrubbed the sink to no end and then hopped on my computer to share the story with you all!