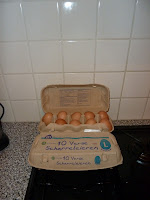 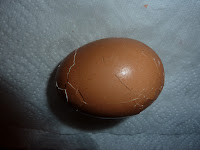 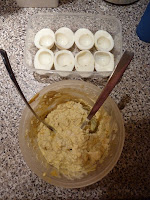 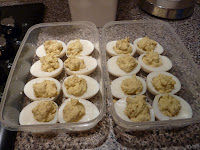 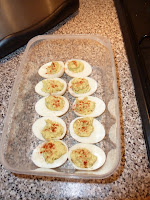 Well the holidays are here so that means time for family dinners and get-togethers with friends. Most years I avoid having to bring a dish to the meals, opting out for snacks or drinks, but this year I was asked to make deviled eggs for my sister-in-laws Christmas Eve dinner. I dreaded every moment leading up to it. It's been years since I made deviled eggs and I can't say even then they tasted nice. But between a hectic holiday schedule, including a driving lesson on the morning of the 24th, I managed to make them. I decided to split the work up into two days, just so I wouldn't run out of time. Plus I like taking my time cooking, I don't want to make any mistakes. I boiled 2 dozen eggs according to a recipe I found online for deviled eggs, it was a different way of hard boiling eggs than I was used to. I put the eggs in a pot, brought the water to a boil, then only let them since in the hard boil for 3 minutes (usually I boil them for 10 minutes).  Then according to the recipe I was to remove them from the burner and let them sit in the hot water for 30 minutes, sounded strange but I had nothing else to work from. Then after letting them sit I was to to cool them in ice water for 20 minutes, all of this was to help with peeling and to lessen the chance of the green ring that often appears on boiled eggs. I felt this was a lot of work just to boil eggs but I wasn't going to take any chances. Apparently the hard work with deviled eggs is peeling them! But surprisingly enough I managed to peel 18 eggs without damaging them. I had 2 extra eggs just is case of a disaster but it worked out. According to the recipe I was supposed to leave the eggs on their side over night prior to boiling them to ensure the yolks were in the middle, but I didn't feel like turning it all into such a large project, I just wanted to make something edible. After peeling and slicing the eggs it was time to empty them to make the filling. This is also quite time consuming, I don't have a technique for emptying the eggs so between prying them loose with a spoon and squeezing the eggs I eventually popped all of the yolks into a bowl. The next step was easy, just a matter of tossing all of the ingredients into the bowl and mixing. At one point I was afraid to taste my own concoctions, but I knew I should before I refilled the eggs. Surprisingly it tasted a lot like ones I remember getting at family events growing up. I ended up combining two recipes one for preparing the eggs and a different recipe for the filling. I found a recipe that a restaurant in Indiana used from the 1920's-70's, and if I ever have the need to make deviled eggs again I'll refer to the recipe from the Durbin Inn. Now it was time to refill the eggs, I had no idea how much to portion per egg so I started out with small spoonfuls and kept making rounds until the bowl was empty. For the most part this went well. All the while I took pictures, just in case the eggs didn't make it to the party I had proof that at one point they looked nice. It was time to add the paprika to the top at first this went smoothly but as I sped up I started getting sloppy, but by this point I was just tired of dealing with the eggs. I had to no choice but to transfer the slippery eggs in plastic containers to the dinner. Just trying to get them in and out of the fridge I smashed a few eggs together, I didn't think they stood a chance of making it. Then of course we were running late for the dinner and with every turn I felt the eggs sliding around, I expected a disaster when we arrived. but to my surprise they survived! I wouldn't say they were a hit compared to the rest of the food, but most of them were eaten (by the kids, ha-ha!) I did save a small batch for the Christmas dinner the next day and with pleasure I watched them get snatched up and eaten. I know my family is thinking, I can't believe you're still going on about the eggs, but hey, what can I say, I complain a lot and I retell stories endlessly!
Email ThisBlogThis!Share to TwitterShare to FacebookShare to Pinterest