Carnival (Dutch = Carnaval) celebrations aren't high on our list of priorities but we do occasionally join in; most years we don't even bother to dress in costumes or even step foot in the city center. 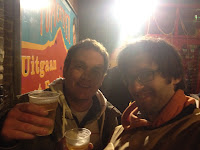 The idea behind it is fun; dress is crazy costumes, get drunk, and listen to Carnaval music while crammed into a dangerously full bar.  But the level the Dutch take it to can sometimes be intimidating, drinking for days on end, all hours of the day, can make most foreigners shy away.  I have nothing against alcohol or even getting a babysitter and having a wild night but I just can't hang with the Dutch when it comes to Carnaval.  I've heard rumors that some people are actually afraid to go into the city center during the celebrations because the level of aggression and drunkenness is too high.  This has never affected me or my husband until this past weekend.  Friday night my husband and a friend decided to head into the city center during Carnaval and grab a drink at a couple of our favorite places in town.  They first stopped at Popocatepetl, a Mexican restaurant that was selling beer outside for Carnaval (that's where the above photo was taken).  After that they headed on to Dr. Ink, a unique bar we pop into occasionally.  Then between Dr. Ink and their next stop, O'Sheas Irish Pub (another favorite of ours) they made a chivalrous decision that ended in a fight!  "Fight" is a strong word, it implies everyone was fighting but that wasn't the case.  "Jumped" that's also strong, it implies a group of people attacked them, which didn't happen.  I'll just get on with the story... my husband and his friend noticed a young man in his 20's arguing with a girl around 15 yrs old.  He was forcing her along, yelling at her, while she pleaded for him to stop & let go of her.  Ryan hoped it would diffuse without his involvement but it kept on, she would get away and the man would again latch on to her.  The couple weren't alone, all of the friends with them (guys & girls) were also trying verbally to get the man to stop.  When my husband & his friend realized he wasn't going to give up and he was going after the girl again (she had managed to break free for a moment), they yelled and caught his attention and told him to leave her alone.  Ryan said all he could think about was our daughter and that he would want someone to help her.  The man, his face painted white for Carnaval, decided to then unleash his anger on Ryan & his friend.  Ryan's friend, dressed in a Sumo costume, took the first punch.  The man hit him in his face sending his glasses flying, he ended up getting punched in the face 2-3 more times.  My husband doesn't like to fight, he is anti-fighting, so when the psycho went at him he was smart enough to block his face. 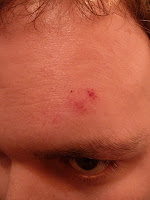 The man put him in a headlock and repeatedly tried to punch my husband in the face.  Ryan blocked all the shots but one, when the psycho clipped my husbands forehead causing him to bleed he had enough, put him in a headlock then forced him to the ground.  The man jumped up and continued yelling at Ryan & his friend, but eventually conceded and ran off.  The girl luckily got away and the man luckily didn't pull out a weapon or involve his friends, but my husband & his friend ended up with cuts & bruises just for trying to help out a young girl.  They never once threw a punch and yet were attacked repeatedly.  I sometimes wonder what this world is coming to, I'm just glad my husband got involved.  People think they can get away with everything these days, they think people are afraid of them, and will not step in.  But guess what, there are still decent people in this world, people willing to help and willing to get involved even if the person at risk is a stranger.  In this day and age everything goes viral, there's always someone standing around with a phone/camera, so of course I checked You Tube.  A guy in Sumo suit getting punched in the face or a brawl in the middle of town near the main cathedral is something I thought would end up online, but it hasn't.  We'd love to be able to take the video to the police, but then again being that it was Carnaval and the man's face was painted it would make it hard to identify him.  If you happen to have heard anything about this, please let me know.  I've included a photo of my husbands forehead, hope no one is squeamish.  Despite this incident it does not make us fearful of Carnaval or going out in Eindhoven, we've enjoyed Dutch celebrations and the city center for years with pleasure!!!
Email ThisBlogThis!Share to TwitterShare to FacebookShare to Pinterest