Until February it seemed we were going to have a mild winter, but then the temperature dropped and a decent snowstorm hit.  Being a Floridian I can't say I appreciate it when the temp drops below 20°F. 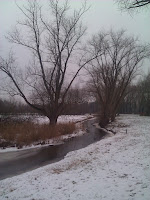 In general I'll pick cold over heat, but the last couple of weeks have been enough to keep me inside unless necessary.  The ponds and canals froze over, the snow wouldn't melt because it was too cold, and the skin on my hands painfully cracked.  On the walk home from my daughters swimming class I snapped a shot of the canal that runs through the Ton Smitspark.  It was partially frozen over, but surprisingly enough there were a lot of ducks collected along the canals edge.  Despite disliking it being super cold, I do love the beauty of the snow.  The park was basically undisturbed, unlike the city center where I live.  Snow and cars don't mix, the ugly black snow it creates just ruins the view.  Just when I thought the cold was going to carry on for weeks longer, the temperature rose to a tolerable mid 30°F. 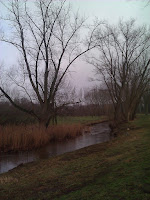 So the next week on the walk home from swimming the rain had melted all of the snow and canal was flowing again.  I snapped another shot, shocked at the difference a week makes.  Besides the trees still being bare, you wouldn't guess the photos were taken a week apart.  I was glad the snow was gone, mostly because I was allowed to start driving again.  I know how to drive in rain but snow and ice, well, my husband wasn't comfortable with me driving our daughter around after only having a license for a month (I completely agree).  I'm crossing my fingers that the weather will only improve.  I'm ready to get back outside, go walking, take my daughter to the park, and above all go outside without gloves & a scarf!  I used to laugh to my husband when the Dutch would rush outside on the pretty days, but after 9yrs of living here, I'm starting to get it.  For all the times you're stuck inside due to the cold or rain, when it is nice outside you best go out and enjoy it!
Email ThisBlogThis!Share to TwitterShare to FacebookShare to Pinterest