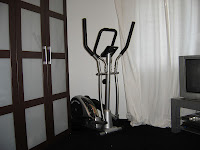 In 2006 my husband bought me an early Christmas present, my beloved cross-trainer.  I haven't been to a gym since 2001 and at that time relied mostly on exercise DVD's and my own calisthenics routine.  I originally wanted a treadmill (one of my old favorites from my gym days) but they are unfortunately too big for most Dutch homes, especially apartments.  I did some research and it turns out the cross-trainer (aka elliptical trainer) is actually better for you than the treadmill.  We ordered it online and it was delivered to my front door.  When it arrived in a box I grew concerned, I convinced the delivery man to at least lug the heavy box to my bedroom but he refused to assemble it.  Sometimes customer service baffles me, you pay hundreds of euros for something and they will not even put it together for you!  I pulled out the instructions and managed to assemble it myself, later I realized I had mixed some of the nuts & bolts up, and they later broke off.  So I advise you to read the instructions carefully if you ever purchase fitness equipment for your home.  I was immediately over the moon with my cross-trainer, it was such a smooth work out and had great results.  The biggest problem (I found) with exercising at home was boredom, using the cross-trainer while just listening to music wasn't enough.  I had to make it entertaining in order to make myself get on the thing (getting in shape apparently wasn't enough back then).  Grey's Anatomy was a fairly new show at the time, so I bought the first few seasons on DVD and started watching them while exercising.  One show lasted about 45 minutes, that was enough time to exercise and stretch out.  Eventually I ran out of tv shows and went on to movies, splitting it up over a few workouts.  When I became pregnant in 2009 I told myself I would keep using the cross-trainer, besides overhauling my diet I planned on exercising too.  But pregnancy wiped me out and I didn't set foot on the cross-trainer.  Even after my daughter was born I still didn't get on it, it haunted me, everyday hovering over me in our bedroom.  (It literally haunted my husband, he would hang his shirts on it and awake in the middle of the night thinking someone was in our bedroom, ha-ha!)  Finally after a series of efforts to lose the pregnancy weight... pilates, zumba, walking... I decided it was time to get back on the old machine.  Five years, and many workouts later it had grown creaky and was too loud to use while my daughter slept.  Excuses, excuses, I had plenty.  After growing depressed about the lack of weight loss, I knew I had to do something, I had my husband drag the cross-trainer to our shed and I set up shop there.  While my daughter napped I could use the loud old cross-trainer in the comfort (yeah right) of my shed! 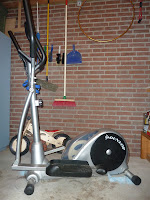 In the summer it is occasionally too hot to go out to the oven for a workout and in the winter (weeks like now, -8°C/17.5°F degree weather) it is unbearable to exercise in the shed.  But all of the time in between, which is a lot, I can get out there 3-5 times a week, I try not to let more than 2 days go by without a good 30 minute workout.  I even added extra arm exercises with weights while on the cross-trainer to help tone up one of my problem areas.  Nowadays I get to stare at a supply shelf and listen to music through my cell phone, but I'm not complaining, I'm just happy to be toning up and shedding the pounds!!!  I'll leave you with a recent photo of my cross-trainer, it's cracked, chipped, and about to fall apart but I still love it.
Email ThisBlogThis!Share to TwitterShare to FacebookShare to Pinterest