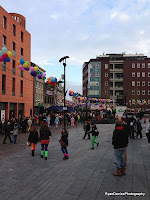 It's time for "Carnaval" in The Netherlands again (well technically it's almost over).  To be honest I have never really bothered to look up the meaning behind all of the Carnaval celebrations.  I know it has it's backgrounds in the Catholic roots and ends on Ash Wednesday.  To me Carnaval is just a big celebration where the Dutch get dressed up in Halloween-ish outfits and drink & party for a good 3-5 days.  Oh yeah, and there are also parades on the weekend leading into Carnaval.  Of course all of the partying has it's up and downs.  For those of us with children trying to carry on our normal lives, the drunks and trash littering the streets can easily be hindering.  Plus there are also the people that decide to get violent, nothing like a 3-5 drunken celebration to bring that side out of people.  Last year my husband was actually involved in a fist fight while trying to help some teenage girl out of a bad situation.  When this year rolled around neither one of us felt like dressing up and joining the raging party in the center of town, but some how or another, there we were.  We had a babysitter for the night and after dinner with friends we ended up at one of the few acceptable bars, Dr. Ink.  But since we were not dressed in a costume we were harassed, which inevitably sent us home to come up with some sort of outfit. 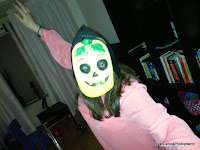 Since we live within 5 minutes of the center this wasn't a crazy plan, not to mention I desperately needed to use the restroom but the one at the bar was beyond dirty.  We popped home with a friend and grabbed some of our masks, combination of el-cheapos that belong to our toddler and an old Frankenstein mask that's been handed around our friends.  But since this just wasn't enough my husband also lent us all some of his sports jerseys from when he was a kid.  Now, I wouldn't quite call this a thought out costume, but it was enough to make us look colorful and silly, which would keep us from standing out (as funny as that sounds).  When we returned to the bar, no one said another word, it worked!  It turned out to be quite a night - we started it out by losing our money before even entering the bar, eventually being forced to use the disgusting bathrooms, and there was some girl unhappy with my dancing (I guess I kept bumping into her) - among all of this we had a great time.  My husband promised to take pictures for me while we were out so I didn't need to take my purse, but once the night started going he didn't appreciate the shots I wanted to capture. 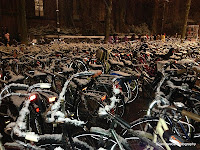 I did get him to take at least 5-10 pictures and now it's been like pulling teeth to get them off his phone.  I did manage to get at least 3 pics from him.  The first was on the way to the restaurant, it was still day time and things were still on the fun family side of Carnaval (entrance to one of the busy party streets).  The next pic was me in a mask but before changing into the jersey (I eventually ended up trading masks with our friend and I think I possibly lost mine by the end of the night).  And the last pic was of the bikes covered in snow, we didn't expect it to be so cold, much less a small snow storm, but by the time we walked home we weren't feeling much.  Overall Carnaval has been fun this year, my toddler loves seeing all of the people dressed up in costumes, we're inside by the time the crazy people come out, and our night out was expensive but still worthwhile.
(Oh yeah, and the gloves my husband blames for losing the money were ones I forced him to wear because they're for smart phones, since then I've missed placed all of my gloves, borrowed these for a trip into town today, and lost one somewhere near McD's, I guess that set of gloves was doomed from the start!)
Email ThisBlogThis!Share to TwitterShare to FacebookShare to Pinterest