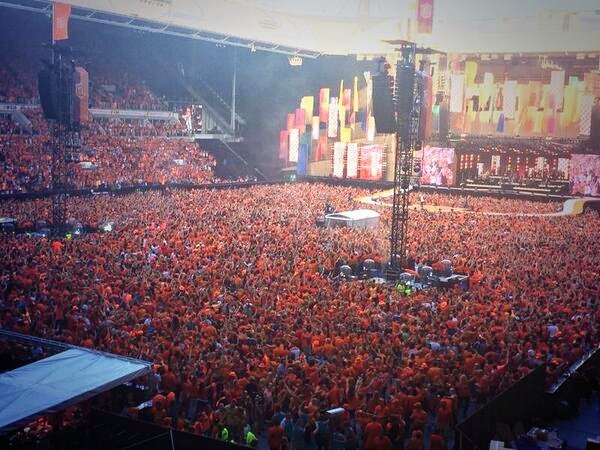 Downtown, the center, anyway you want to call it, it's where we live in Eindhoven.  Right smack in the middle of things, and we love it.  (If only we had a house & yard, but hey, can't have it all!)  This past weekend besides all of the World Cup action in town, there was the Guus Meeuwis concert.  He is an insanely popular Dutch singer/songwriter.  For three days parts of town were impossible to get to due to the roads around the PSV stadium being closed off for the concert.

Apparently my husband had tickets but decided to give them to a couple he knew would appreciate them more.  And he's right, it would have been fun but I know all of one song.  And the other couple had the night of their lives.  Even though we didn't go we were still able to enjoy the concert at home.  How?  I mentioned we lived in the center of town right... well the sound from the stadium echoed through town all the way to the terrace of our apartment.  We didn't spend long outside listening, but we did enjoy a couple numbers.  It was amazing, not because of the lone man singing on stage, it was the thousands of people singing along that made it so incredible.  It was a interesting moment, closing our eyes and taking in the sounds just ten minutes away.  These are some of the things we will miss once we sell our apartment, so it was nice taking in the moment.