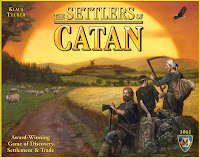 I'm going to keep this post short; since the puppy entered our lives I've been lacking time for side projects like my blog.  I don't want my readers to think I am just a series of Wordless Wednesdays nowadays.
I did want to recommend a game though, it's called Settlers of Catan.  You might have heard about it on the tv show Big Bang Theory.  It may seem boring at first glance but it's actually an interesting game that will hook you.  Like Monopoly it takes hours.  Since we don't have the actual board game at home we downloaded a version on the iPad and to be honest I prefer it.  Only because you can stop when you like and resume the game days later if needed.  Lately my husband and I have had a running game, and as soon as it's over we start a new one.  Playing games together has been something we've enjoyed since the beginning our relationship.  Some of our first few dates consisted of playing pool and Trivial Pursuit.  Sometimes we have the tv on, a game going, and all the while talking away... who says it takes a lot to entertain people these days, ha-ha!﻿
Email ThisBlogThis!Share to TwitterShare to FacebookShare to Pinterest