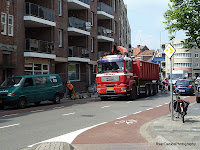 Just short of one year ago I wrote the post "Popping Up", it was about silly signs and dreadful trash cans the city was installing all over town.  At the end of the post I mentioned that the city was planning on installing one of these eye sores in front of out apartment.  Well, in the summer they did just that.  They eliminated a perfectly good money-making parking spot and installed a trash can in front of the apartment we're trying to sell.  Great (I wish you could feel the sarcasm)!  I included a photo of the commotion in front of our place... huge machinery, large trucks, the bikers couldn't safely get by, the cars were blocked up at the intersection, and oh yeah, they knocked out the electricity too!  And besides the fact it's a public trash can (well, for pass holders), the city didn't even bother to lay the new sidewalk out evenly.  Now every time it rains we get huge puddles in front of our steps.  Arg!  Then, just as I figured, not everyone understands or cares that they need a pass to open the trash can.  This means trash gets tossed around it, and on Tuesday mornings they still pile all of their trash bags around it for the dump truck to collect.  Since its installment, it's been marked with graffiti, had lovely looking crap smeared down the front, and seems to often be surrounded by broken glass. 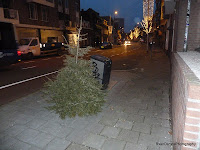 Luckily, it's winter so that keeps the smell down (and it's actually only hot enough for it to stink 1-2 months out of the year).  But with winter comes other things, like Christmas trees.  I walked out the front door to take my toddler to preschool, and lo & behold, a dead tree.  It's Tuesday, so I crossed my fingers hoping the trash man would collect it, but I knew better.  The tree is still there and the trash bags are gone.  (I'm letting out a huge sigh right now).  I'm not really sure what to do, I guess complain to the city.  But what about the mean time, you can't even see the for sale sign around the Christmas tree (which is also shedding needles all the while).  Now that evening has arrived, I'm considering sneaking out there and moving it to the otherside of the trash can, at least then no can blame us.  And to be honest it's not the first time I've had to move other peoples random things.  Occasionally on paper recycling day the boxes, magazines, etc, get strewn around on the sidewalk in front of our apartment instead of neatly in a box on the curb.  I just love cleaning up after others, as if my husband, kid, and dog weren't enough.  For those of you wondering, I did complain to the city about the eye sore and that it's going to make selling our apartment even more challenging.  They said, I received a warning about the trash can (I mentioned the letter in the "Popping Up" post, and apparently I was supposed to contest it then, now it's just too late.
Email ThisBlogThis!Share to TwitterShare to FacebookShare to Pinterest