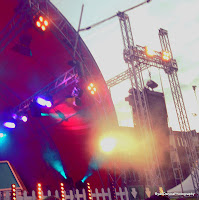 Some friends of ours were visiting from Australia so this called for a night on the town.  And being that there is always something to do in Eindhoven, to our benefit there was a huge stage and dj's set up not far from where we live.  We enjoyed a few drinks at the bar many internationals seem to migrate to, the Irish pub.  Then we hit up our favorite steakhouse.  And after that we were off to find out just what the music echoing through the city center was all about.  Turned out it's called Sneakerz in de Stad.  It's a platform for international dj's to present their house music and even better, the event was free!  In my daily life you're not going to catch me playing techno around the house, but when you just want to jump around and have some fun on a night out, techno is perfect to get the crowd excited (at least here in The Netherlands).  At some point when I looked around the event I definitely thought... I'm getting old, all of these kids are in their early 20's...  why am I the only one wearing a fluorescent shirt standing in front by the stage...  don't loose your slip-on shoes because the ground is disgustingly sticky.  But overall, it was fun and worth popping by to join in the mayhem.
Email ThisBlogThis!Share to TwitterShare to FacebookShare to Pinterest