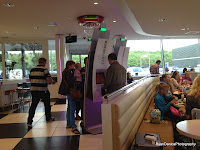 When I first moved to The Netherlands I was definitely given the impression the Dutch avoid McDonald's like the plague.  It's considered way too unhealthy for their lifestyles.  But I must say in the past few years I've noticed the McDonald's here getting busier and busier.  I'm not embarrassed to say I pop into McD's occasionally.  Me & my tot love the milkshakes and it's a nice treat a few times a month.  And sometimes we also order food; big deal, we eat healthy otherwise.  (And to be honest McD's here taste different than in The States, I don't eat it when I'm there.)  The last couple of times I have been to McDonald's in Eindhoven or Best they have been packed. 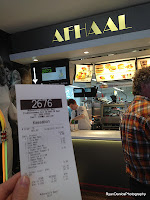 Long lines and high prices, where is the convenience exactly?  At least one McDonald's in the area has done something to help bypass the usual line, they've installed "Easy Order" machines.  No explaining again and again what you want to eat or fiddling with cash, because you place the order yourself via the machine and use your ATM card (pin pass) to pay.  Then you even stand in a separate line to pick up your food.  Considering the majority of the crowd still went to the standard line there were actually fewer orders before ours and we received our food quite quickly.  It still costs an arm and a leg for a greasy pile of food but at least the speedy service has returned.  Now if they would just do something about the ridiculous inflation of the menu prices!
Email ThisBlogThis!Share to TwitterShare to FacebookShare to Pinterest