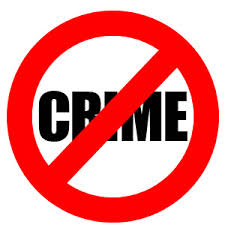 If you're not interested in reading me grumbling about crime in our area then I would skip this post over...

What's happening?  When I first moved to The Netherlands over 10yrs ago it took me a long to get used to how safe it is was.  It was hard for me to comprehend that I could walk down the street alone at night... that I never had to consider locking the doors of the car as we drove... that the kids hanging on the corner were still harmless, just big mouths... and that if you got into a confrontation a gun wouldn't even come to mind.  But now, one of the major bonuses of living in The Netherlands is starting to change.  Sure, there was always crime in the big cities or petty crime here & there in the smaller ones.  But lately every time I open the local online news I'm reading of more and more serious crimes, ones comparable to where I came from in The States, ones that didn't used to be so abundant here in the past.  Within the past 2 months there have been at least 2 store robberies at gun point, one was even across the street from my child's elementary!  (And another in a town not so far away.)  Then this evening I open the news again, and 2 gas stations within 10 minutes of our apartment were held up at knife point, then there was a 3rd across town.  The Netherlands has so much to offer, a healthy living style, great health insurance for the children, clean streets & parks (of course all paid for by the extreme amount of tax people pay, but that's besides the point).  Crime seems to be on the rise, guns are starting to become more prevalent despite the strict laws.  And besides weapons, it seems like some of the people are changing or maybe the numbers of criminals are increasing... it seems as if they have less respect for the world around them.  I hope this isn't true.

In The States, I can barely watch the news, they often use scare tactics to get viewers or get people hooked waiting for the next update.  And it often seems like endless negative report after another.  Maybe that's what's happening here.  Maybe the crime was there all along and the media just never focused on it.  But now they are, and the scare tactics are working.  It makes me question the safety of Eindhoven, makes me wonder if it's still the right place for us.  Everywhere has its pluses and minuses, I guess I'm just surprised as to what is happening here, somewhere I didn't expect.  I try and tell myself no matter where you go in the world there is crime, just some places worse than others.  I enjoyed living with little concern about crime around us, but I guess that was naïve anyway.

Sorry for the depressing post, and I promise I will get around to happy fun posts about our vacation to Florida.