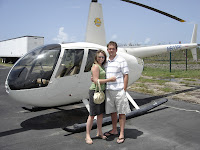 I don't know if you've ever had the chance to take a flight in a helicopter but I highly recommend it!  I've been lucky enough to have done this twice.  The first time was when I was fresh out of school with a credit card burning a hole in my pocket.  Living near Orlando gave me access to all of the great things available to tourist, so a friend & I booked a flight and took a tour over Orlando with a group of people.  It was fun, it was new, it was exciting, and we were able to see the theme parks I often visited from a new angle.  The second time was during my honeymoon. 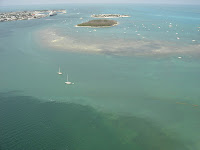 We were in Florida for 3 weeks and during that time we took a trip down to Key West.  Wanting to take full advantage of our honeymoon we decided to book a private helicopter flight over Key West.  It was expensive, the pilot said the flight would cost 100 dollars to fly over the city and if we wanted to fly over the water it would be another 100 dollars.  Being young and not having much money we opted for the shorter trip.  The pilot gave us an option to fly without the doors, of course we took it, we didn't think it could get much better.  He flew us all over the island, we were able to take pictures of our resort and even see the golf course my husband played; it was great, then he took us to the water's edge.  Knowing how beautiful and exhilarating it was, he offered again, 100 dollars and I'll take you over the water.  We couldn't say no, and I'm glad we didn't.  It was one of the most special things I've ever been able to do in my life (again, my husband making dreams come true). 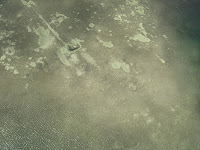 We saw everything from ship wrecks to groups of dolphins, stingrays, paragliders, and lots of boats.  And when we saw a shark the pilot lowered the helicopter to get a better look, we were so close to the water it was chopping.  We were able to make an incredible movie of the shark and put it on You Tube for the world to enjoy.  At that moment he could have charged us any amount and we would have kept flying, it was such a rare experience.  When we landed my husband and I were so moved by the trip that we seriously talked about sending my husband to take flying lessons (then we looked up the costs, ha-ha).  So again, I say, take a helicopter flight, but be sure you are actually flying over something worth seeing.  And if doors are optional, you have to take them off, you see more, you feel more, you experience more!
Email ThisBlogThis!Share to TwitterShare to FacebookShare to Pinterest