I wish I could say this post is about the great sculptures in the parks around Eindhoven, or about the beautiful landscape in the center of town, or even about the silly signs the city is putting up everywhere, but it's not.  It's about random yet semi-disturbing (a bit extreme, how about bothersome) things I saw in the park on the walk home from toddler swimming class. 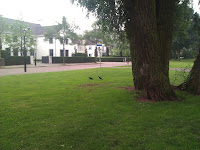 The first was two large black birds eating a field mouse.  I spared you the close up, but here's a photo from a distance.  It's nature, it's the food chain, it made me want to lose my breakfast!  Pushing the stroller with one hand and shielding my 2yr olds eyes with other I rushed passed, but something in human nature makes us look back.  It's fascinating and vulgar at the same time, the way the black birds pecked the mouse and flipped him violently was almost too much though.  And yet I stopped to take a picture, maybe I'm the gross one, ha-ha! 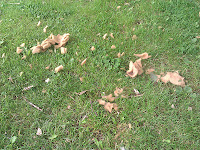 The next thing I observed was the fact people actually shave their dogs in the park.  Maybe to dog owners brushing and shaving their pets in the park is normal, but to people like me with a kid running around it's actually just nasty.  Sure my stomach was still queasy from the black birds, but the clumps of matted dog hair were repulsive.  Of course I had to take a picture, otherwise these random blog posts might not be as interesting.  What were these people thinking leaving these hair/fur clumps behind?  Are they just hoping they blow into the wind, get shredded when the city mows, or get recycled by birds for nests? 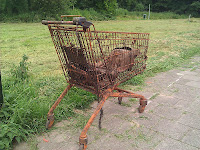 And the last thing I have to complain about is an old shopping cart situated next to a trash can.  Again, what are people thinking, maybe they hope the city will pick it up when they collect trash?  The amount of rust and the odd & end items (one being a child's bike seat) in the shopping cart did spark my curiosity though.  Was it fished out of the bottom of a nearby canal when they recently redirected it?  Was it buried for ages in the tall shrubs, recently found by the city worker as he cut the grass?  Is the 50 cents still in the coin deposit?

I thoroughly enjoy the parks here in the center of Eindhoven (our own Central Park), but today was a let down.  Or was it... I did get a blog post out of it!
Email ThisBlogThis!Share to TwitterShare to FacebookShare to Pinterest